TPOBPAH at Summerstage in 2012 (more by Chris La Putt) 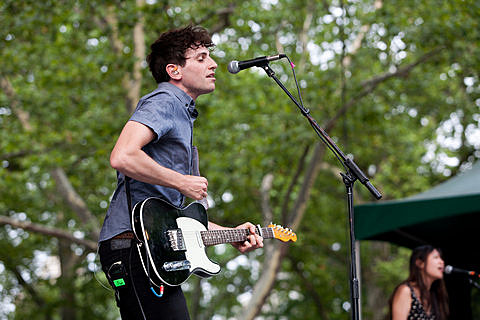 NYC indie pop band The Pains of Being Pure at Heart have been relatively quiet lately, but it's looking like that's about to change. Frontman Kip Berman has been instagramming guitar pedals lately, which hopefully means they're back in the studio, and Pains have also announced what will be their first hometown show in a while, happening on March 28 at Rough Trade NYC. Tickets for that show go on sale Friday (1/17) at noon.

There's also been some changes to Pains' lineup. Keyboardist Peggy Wang recently announced that she left the band in order to focus on her job as a writer at Buzzfeed.

TPOBPAH recently released a belated video for "Belong" off their 2011 LP of the same name, which you can watch below...