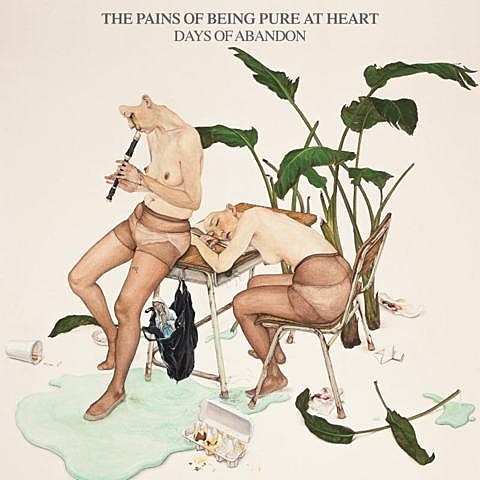 The Pains of Being Pure at Heart will release their third album, Days of Abandon, on April 22. It will be their first for new label Yebo Music. (Their first two came out on Slumberland.) That's the cover art above. Frontman Kip Berman says the new record will not be a continuation of Belong's big, uber-'90s sound:

"I didn't want to make Belonger. This album was a chance to step back from that universal style of songwriting to something that was far more personal, more in keeping with my original ideals. I wanted the music to be joyful and full of light, even if the subjects were often dark."

You can check out an album trailer below.

You may remember that TPOBPAH recently announced a hometown show happening at Rough Trade on March 28 after they play BUKU Music + Art Project. That show has since sold out, but the band since revealed that they're going on a longer tour in late April into May, which includes another NYC show on May 22 at Bowery Ballroom. That show and others on the tour are with the UK's Fear of Men, who have a debut album coming in late April, and Ablebody are on the bill too. Tickets for that show go on sale Monday, March 3 at noon with an AmEx presale starting Wednesday (2/26) at noon. There's also a presale happening right now through Soundrink with bundles availble where you can preorder the new album as well.

These upcoming will mark a new live line-up for TPOBPAH that features Drew Citron of Beverley and Avan Lava and presumably others -- the band's Facebook only lists frontman Kip Berman currently.

Both Beverly and Fear of Men play Brooklyn Night Bazaar in April. All TPOBPAH dates are listed, along with the album trailer, below...

The Pains of Being Pure at Heart - "Art Smock" (trailer)