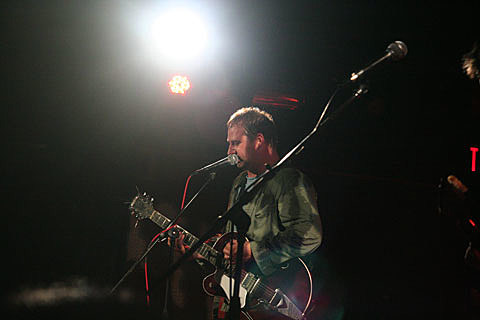 "OK, let's get back to the music! We've been hoping that Greg Cartwright might join us at Hanukkah for years now, whether with the Oblivians or Reigning Sound or solo -- the guy wears many hats. Turns out that all we needed to do to coax him north was share a record with him and his newest band, the Parting Gifts (which reminds me -- did I ever tell you that my mom was a contestant on Concentration?). Direct from recording a session for WFMU's Cherry Blossom Clinic, apparently the first time all six of them had ever played together, they sounded great -- who's writing better minor-chord songs than Greg Cartwright? No one. Add a couple of Coco Hames's more country-oriented numbers and their side of our split single, and night 2 was off to a roaring start." [Ira of Yo La Tengo]

The covergence of The Ettes and Reigning Sound happened during three short dates on the East Coast last week (one with Yo La Tengo), as The Parting Gifts (featuring Greg Oblivian and Coco Hames of The Ettes) played Maxwell's on December 2nd and Union Hall on the 3rd. Video from Maxwell's is below. How was Union Hall?

If you missed them, unfortunately there are no dates laid out for The Parting Gifts in the near term, but Reigning Sound is playing the Bell House in Brooklyn on Feb 18th. Tickets are on sale for what appears to be their only scheduled show at the moment

Reigning Sound can be heard on that Nolan Strong tribute compilation called Daddy Rockin' Strong: A Tribute to Nolan Strong & the Diablos that also features contributions from Mark Sultan, Dirtbombs, A-Bones (whose member played with Yo La Tengo this week), Wreckless Eric & Amy Rigby (who both also played with Yo La Tengo this week), Gentleman Jesse & His Men, and others. Pick up a copy.

The Ettes played NYC two days before The Parting Gifts hit Maxwell's, supporting The Greenhornes at Bowery Ballroom on 11/30. The band currently has one upcoming show: January 16 at Pour House Music Hall in Raleigh, NC.

The Parting Gifts videos from Maxwell's and other recent vids of The Ettes and Reigning Sound are below...

Reigning Sound-We Repel Each Other

Reigning Sound-You Got Me Hummin'