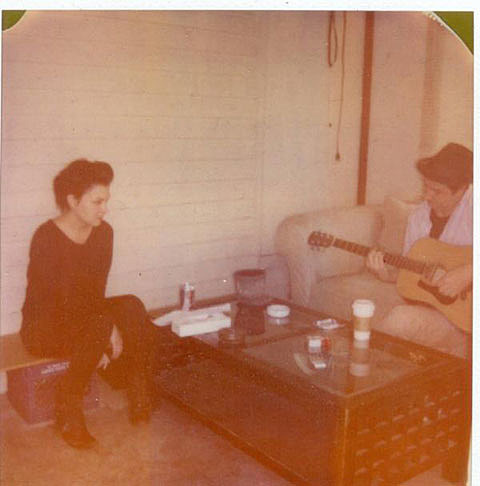 Greg Cartwright aka Greg Oblivian has teamed up with Coco Hames of The Ettes to form the Parting Gifts. They, naturally, recently played Gonerfest...

"Their set started with a catchy track, "Keep on Walkin'," from their upcoming album. They sounded great, with Chuck Berry riffs and boogie-woogie piano and awesome, pounding drums provided by Poni of The Ettes. Their music isn't straightforward punk, but soulful, moody garage rock that seems to take inspiration from many decades of intense, heartfelt rock 'n' roll." [Nashville Scene]

That "upcoming album" is called "Strychnine Dandelion", and is actually out now via In the Red and is streaming in full online.

Maybe you caught the Ettes Tuesday night at Bowery Ballroom. They opened for the Greenhornes. Catch the Parting Gifts Thursday (12/2) @ Maxwell's (if you have a ticket since it's the 2nd of eight sold out Yo La Tengo Hanukkah shows), Friday (12/3) @ Union Hall with The Morgues (tickets), and Saturday (12/4) @ Sonar in Baltimore (thx anon).

Seven more YLT openers to figure out. All Ettes and Parting Gifts dates below...