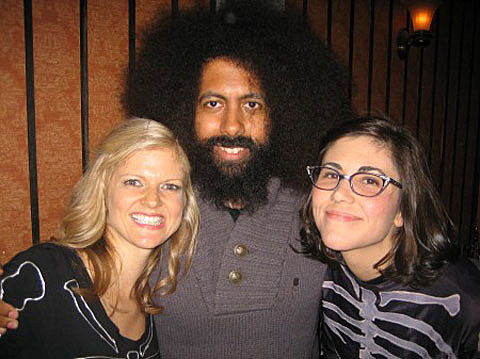 And now for the good news that will hopefully serve as an antidote for the terrible news. Have you been one of the lucky and smart mofos who has managed to catch The Party Machine at one of its many appearances at Brooklyn's Union Hall? Those shows, hosted by Lisa Delarios and Arden Myrin, are always off the f-ing chain and always rife with incredible guests. RIFE I tells ya. Structurally, Union Hall can barely withstand the ruckus the Party Machine inflicts on the place, so on Thursday December 8th, The Party Machine will test The Bell House's mettle with The Party Machine Holiday Benefit for The Stiller Foundation.

The Stiller Foundation is a philanthropic effort led by Ben Stiller (never heard of him) whose aim is "to support children around the world by providing educational opportunities to help them realize their full potential." The line-up for this show is EPIC to say the least. Like, so epic that if you suffer from incontinence or heart murmurs, you might want to take some meds before reading on. So far, the published line-up includes Colin Quinn, Michael Showalter, Eleanor Friedberger, Ana Gasteyer, the gorgeous Bobby Tisdale, Seth Herzog (no relation to my nemesis), Andy Kindler (!) and Adira Amram and the Experience. And that's just the talent I am allowed to tell you about. I've heard whispers of special guests what would knock the socks off a shoe cobbler. And the show is only $10! Tha fuck?! I know! Get tickets for the comedy event of the century, and help Ben Stiller in his crusade to help kids who have it so much worse than you whining tarts could ever imagine.

And check this out; Arden's now on the ABC show Suburgatory and doing a pilot with Fred fucking Savage for MTV.

And while you've got your wallet out maybe you should get a coupla tickets to the previously mentioned Pretty Good Friends Holiday Show at the Bell House on December 11th featuring Eugene Mirman (please don't show those slaughterhouse pics again), Kristen Schaal, John Mulaney, and MORE. And when I say more, I mean "Damn, I should have bought a ticket when Klaus mentioned it" more. This show is a benefit for you, the ticket buying smarty-pants, who will get a massive dose of laughter which, I am told, is the best medicine.

Meanwhile catch Eugene Mirman, Dave Hill, Bobby Tisdale & Todd Barry at UCB East on December 5th. It's the Comedy Central Corporate Retreat show and Eugene will be giving a sneak peek of a pilot he made for the basic cable channel.

Todd Barry is filming a Comedy Central one hour special at Gramercy Theater four days earlier! Maybe you saw him practice the material at the Pit.

Oh, and don't forget that Ted Leo and the Pharmacists is playing the Bell House on December 30th. Tickets are still, inexplicably, available.