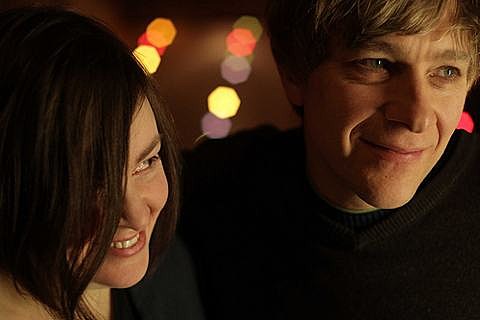 we had *so much fun* at chickfactor 20 at the bell house in brooklyn, the idea of waiting another ten years seemed too painful too endure. so we made another festival for you! showtime is prompty at 8pm. you may miss a special guest if you get there at 8:10!

Indie pop zine chickfactor is putting on another festival at The Bell House on June 11, 12 and 13 with a line-up that includes The Pastels, Future Bible Heroes, The Cannanes, Aluminum Group, The Jim Ruiz Set and more.

This will be the first Pastels show (6/13) in NYC since 1997 (if memory serves, the last one was at Angel Orensanz Center opening for Belle & Sebastian). The Pastels' new album, Slow Summits, will be out a couple weeks prior (June 11) and you can stream new single "Check Your Heart" below.

Additionally, there will be a retrospective of filmmaker Paul Kelly's work on June 15 at NYU's Michelson Theater, including his Felt/Denim documentary Lawrence of Belgravia, the Dolly Mixture documentary, and his three collaborations with Saint Etienne, Finisterre, What Have You Done Today, Mervyn Day? and This is Tomorrow. This will be free and more info is here.

Chickfactor 21 happens less than two weeks after NYC Popfest, making it a very busy time for lovers of indiepop.

The Pastels - "Check Your Heart"

THE CANNANES! all the way from australia! with a sexy new EP out titled small batch!

ROSE MELBERG! all the way from vancouver, b.c.! from the softies, tiger trap, go sailor + many other vintage pop groups.

FUTURE BIBLE HEROES! record release party for the awesome partygoing + their new multi-record reissue package! they haven't played live since chickfactor's ten-year anniversary parties in 2002. (note: stephin may not be onstage, you have been warned!)

ALUMINUM GROUP! from chicago! john + frank navin bring their breezy electropop to new york! they have been working on new stuff!

THE PASTELS! all the way from glasgow, scotland, and also having a record release party, new LP slow summits out in late may on domino & is ace. they haven't played in new york since 1997!

DUMP! brooklyn's own james mcnew from some other band (yo la tengo) brings his powerhouse music group to bell house. he's also in the process of reissuing his catalog on morr music.

JIM RUIZ SET! from minneapolis! the JRS have a fab new long player out called mount curve avenue and are always a treat!