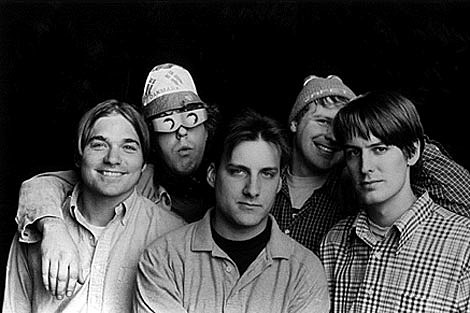 "Pavement embarked on a six month world tour in support of [Terror Twilight], during which time relationships within the group frayed, especially between Malkmus and the other members of the band. Steve West later recalled times on the tour bus where the singer would put his coat over his head, refuse to speak to anyone, and call himself "The Little Bitch". Critics noted that their setlist had started to include a number of their early songs, much like a band playing their greatest hits on a farewell tour. The lead singer's attitude continued to deteriorate as the tour wore on, finally coming to a head during their slot at the 1999 Coachella Festival. During the concert, Malkmus refused (or was possibly unable, due to illness) to sing, effectively turning their set into a mostly instrumental one. Nastanovich called a band meeting after the show, and Malkmus finally confided to his band-mates: "I just don't want to do this anymore."

The group's final concert together was at Brixton Academy in London on November 20, 1999. During the concert, Malkmus had a pair of handcuffs attatched to his microphone stand, and at one point told that audience, "These symbolize what it's like being in a band all these years." After the concert, he confirmed to people at the after-party that Pavement was now done "for the foreseeable future." About two weeks later, a spokesperson for Domino records told NME: "Pavement are retiring for the forseeable future to: 1. Start families 2. Sail around the world 3. Get into the computer industry 4. Dance 5. Get some attention."

In the summer of 2000, Malkmus called Kannberg and told him, "You need to change the website to say we aren't a band anymore. People keep asking me if we're breaking up and you know we're not a band anymore, right?" Kannberg told the singer that he needed to call the other members of the band to inform them that the band was finally breaking up, but Malkmus refused and Kannberg was left with the task of informing them. Steve West later admitted that he never received any official call about the breakup from anyone in the band, and discovered that Pavement had dissolved via the internet. Nastanovich later commented that "There was too much exhaustion for heavy emotion." [Wikipedia]

One of the most popular indie rock rumor topics of this decade is the reformation of Pavement.

According to reliable sources, it's finally happening in 2010! There will be multiple, possibly four, nights of shows at NYC's Central Park Summerstage in September of that year. That could be part of a tour. That could be the end of a tour, the middle of a tour, or even the beginning of a tour, but it seems reasonable to speculate that they might make their official comeback at Coachella in April.

It's also time to start guessing who might be the big curator of September 2010's ATP NY festival (the job Flaming Lips had this year, and My Bloody Valentine the year before that). Might as well put Pavement high on the list of possibilities for that too.