Art from the classic LP 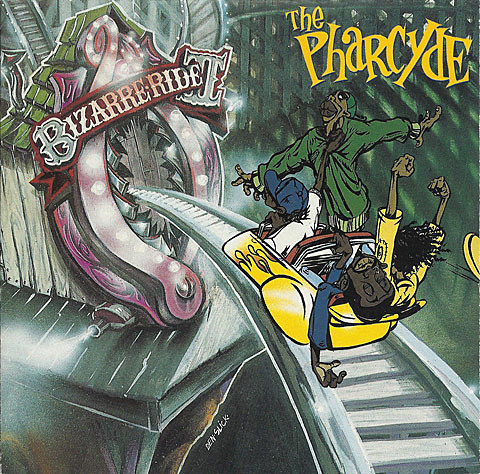 If bands played nice, it would be a lot less confusing for the rest of us. '90s-era hip hop crew The Pharcyde have split into two factions and both are currently touring around the U.S.  Bizarre Ride II The Pharcyde is original Pharcyde members Fatlip and Slimkid3, as well as producers J-Swift and LA Jay. The crew is performing the band's 1992 classic LP of that name, and are even going so far as to publish the setlist ahead of time. Look for BRIITP to perform on Jan 31 at SOB's. Tickets are still available.

Meanwhile,  Bootie Brown and Imani have retained the original The Pharcyde name and while they have no upcoming NYC dates, their current tour schedule is below.

Speaking of crews that can't keep it together, Q-Tip's (of A Tribe Called Quest) next DJ night at Irving Plaza, scheduled for 1/18, has been cancelled, but he has announced one   at the same venue on July 26 with DJ Spinna in honor of Michael Jackson's birthday (now an annual tradition). Ticketing info is on the way. UPDATE: Despite what Live Nation's website says, Q-Tip & Spinna are not currently scheduled to play Irving Plaza on 7/26 (the website relisted the cancelled event from last year as happening this year).

All Bizarre Ride II the Pharcyde and, um, Pharcyde tour dates -- plus song streams -- are below.