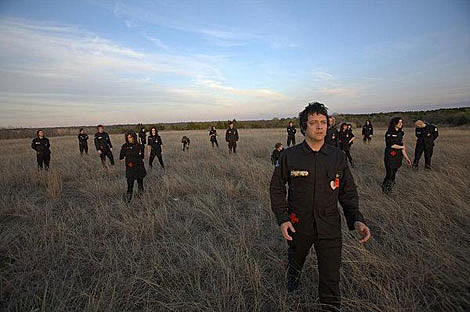 The Polyphonic Spree are on tour with Sweet Lee Morrow and play Webster Hall in NYC on May 23, a show they're going to record and release...

"NYC was our first home away from home in the States," says Spree frontman Tim DeLaughter of the decision to record their first concert album there. "We went from very small crowds in Texas to the UK for for the Meltdown Festival curated by David Bowie in 2002, then straight to New York to play eight shows in seven days on our 'layover' back to Dallas. Our friend took all of our first photos in Williamsburg near the East River (before it was developed) and the rest is history. New York embraced us from the get go. Cynicism wasn't part of it, ironically. We toured so much overseas initially, and coming 'back to the States and feeling at home' meant Brooklyn and Manhattan."

In addition to the live release, The Polyphonic Spree are planning to release a Christmas album this fall, before taking their annual Holiday Extravaganza, which they've staged in their hometown of Dallas for the last nine years, to other markets for the first time. And the band has commenced recording a new original album -- their first since 2007's "The Fragile Army" -- intended for release sometime in 2013. Details will follow later this year.

And this won't be the first time the band recorded Christmas music.

Tickets are still on sale for the Webster Hall show. All dates are listed below...