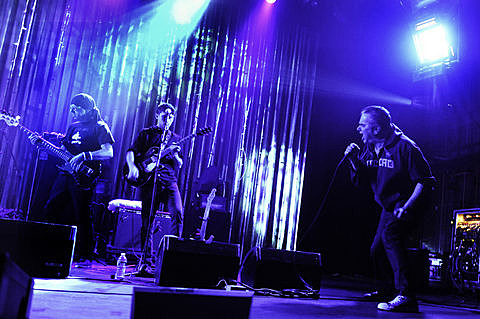 These abrasive, militant British punks rage against racism, oppression, hunger and anything else that's a world problem; as usual, there's no solution, only anger. The seminal Bristol band synthesizes Beefheartian structures and tribal dance beats to create a didactic soundtrack that barely lets you breathe. Their two primary albums are alternately brilliant and intolerable, with exhortatory songs like "Feed the Hungry," "Rob a Bank" and "Communicate." - [Trouser Press]

The original incarnation of postpunks The Pop Group barely managed to stay together three years before splintering, but leaving behind influential tracks like "She Is Beyond Good and Evil" and "We Are All Prostitutes." Most of the original-era members of the band, including singer Mark Stewart, guitarist Gareth Saeger, bassist Dan Cantis and drummer Bruce Smith (who was also in The Slits), got back together in 2010 and played ATP NY in 2011 and have been gigging ever since. A new LP is in the works.

As mentioned, The Pop Group will be coming to SXSW 2015 which will be part of the band's first-ever North American tour which includes two NYC stops: Rough Trade on March 16 and Bowery Ballroom on March 17. Tickets for both NYC shows go on sale at noon on Friday (11/21) with an AmEx presale for the Bowery Ballroom show beginning noon on Wednesday (11/19).

All tour dates, plus streams/videos of classic Pop Group songs as well as a video of Nick Cave talking about them, below...

The Pop Group - She is Beyond Good and Evil