photo: The Pop Group at Rough Trade in 2015(more by Greg Cristman) 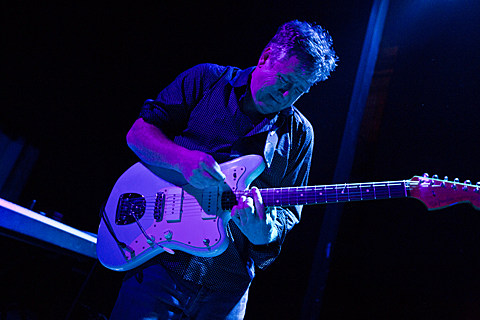 The music world is pretty much always caught up in nostalgia, so it's no surprise that albums from the past are always getting reissued. Here's a roundup of some cool ones to look forward to:

Post-punk pioneers The Pop Group are reissuing of their second album For How Much Longer Do We Tolerate Mass Murder?, which will be out via Freaks R Us on February 19. It's the first reissue of the album, and the first time it will be released on CD and digitally. It also features "We Are all Prostitutes," which was originally intended for the album but didn't make the cut. That song will also be reissued as a limited edition 7" in its original sleeve artwork.

Faith No More are celebrating the anniversary of their debut album We Care a Lot, which had Chuck Mosley as a frontman pre-Mike Patton. The reissue will be out via Koolarrow Records next year, and will include rare photographs and bonus tracks.

Another important album that is being reissued is the iconic Jagged Little Pill, to commemorate its 20th anniversary. This album made Alanis Morissette become the youngest musician to win a Grammy for Album of the Year and sparked the two-decade long debate of the meaning of irony. This reissue is out now on Rhino Records. The 20th anniversary sparked nostalgic feelings for Alanis, who wrote the story behind the making of the album in her site, where she mentions that the album wasn't well-received by record companies at first. She explains:

There were a few songs we re-recorded to see if my intensity could be stamped out a bit (heavy forbid a woman be intense)...and they were rejected by everyone. To their credit, they could tell something was lost in that process. Thank God. When the songs "You Oughta Know" and "Perfect" were written, we went and visited many record companies, none of which were impressed. Rejection for me, over the 10 years I had been in the music industry at that point, intimated I had not found my "home" yet...so I persevered.

Jimmy Eat World are also celebrating a 20th anniversary. This year marks their two decades since their debut as a band. They're reissuing their five major albums on vinyl, which will be out in December. These include Static Prevails, Clarity, Bleed American, Futures, and the Stay On My Side Tonight EP which has never been out on vinyl (and which includes one of their best songs, "Distintegration"). Most will be out as double LPs on December 11 but Bleed American and SOMST come out as single LPs on December 4 and 18, respectively.

Another 20th anniversary: Rancid is reissuing their best album, 1995's ...And Out Come the Wolves, on December 11 via Epitaph. This reissue follows a few shows where they performed it in full.

Spoon's 10th anniversary of their album Gimme Fiction is this year as well. They are reissuing the album on December 11 via Merge and Matador (they're reissuing the international release). It's a double LP that features twelve unreleased demos, nine bonus tracks, and a book with photos and the story behind the making of the album. They shared a demo of "Was It You?" which is featured on the reissue.

Stream Spoon's demo of "Was It You?" and Alanis Morissette's reissue below...