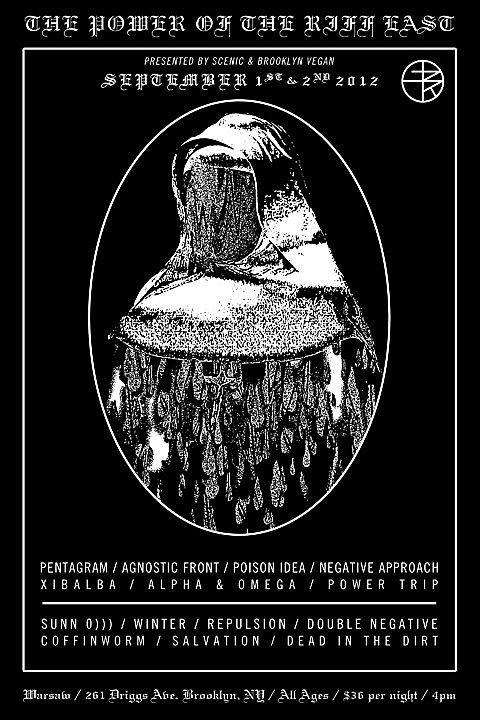 The circle is complete. BrooklynVegan is proud to announce the final additions to The Power of The Riff East lineup, which will go down 9/1 and 9/2 at Warsaw in Brooklyn. Sadly, Unearthly Trance have just called in quits (their show at Acheron last month, which saw them perform In The Red in its entirety, turned out to be their last) but in their stead we have added another THREE BANDS: Agnostic Front, Double Negative and Coffinworm. The new line-up in full:

That's correct, Agnostic Front will play all of their landmark Victim in Pain and United Blood records as part of their 30th Anniversary celebration. The set will differ completely from last night's appearance at Webster Hall (7/5) as part of the CBGB fest. On the second night, you can look forward to appearances from the great Coffinworm and Double Negative!

Tickets are on sale for single shows (Saturday HERE and Sunday HERE) or you can purchase a single weekend pass.

On a related note, both BrooklynVegan and Southern Lord are proud to present tonight's show at The Acheron (7/6) with Black Breath, Martyrdod, The Secret, Burning Love, Enabler and Grudges. Tickets are still available.

Check out video of all three additions below.