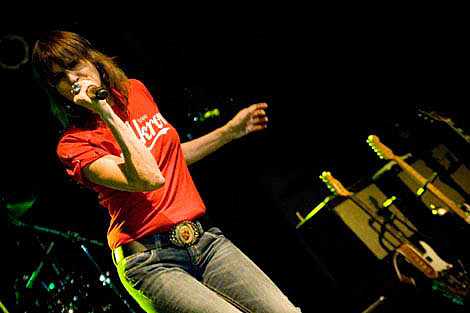 The Pretenders announced a tour through North American starting January 29 at the Palace Theatre in Albany, NY with the final show taking place on March 14 in Reno, Nevada. The tour is the band's first extensive headlining tour since 2003.

The Pretenders touring line up of Chrissie Hynde Martin Chambers, James Walbourne, Eric Heywood, and Nick Wilkinson is touring in support of the band's ninth album, Break Up The Concrete, which was released through Shangri-La Music in October of 2008. The album, which Rolling Stone lauded as, "The best Pretenders album in years," was recorded in 12 days in Los Angeles and offers an especially gritty and immediate and recalls the band's earlier days. The album has spawned the single "Boots Of Chinese Plastic" which reached #1 on the AAA radio chart.

Their last NYC show was at Highline Ballroom around the time of the release of the new album. Their next is January 30th at the bigger Roseland Ballroom. Tickets should be on sale soon. All dates and the video for their new single, below...