The Psychic Paramount at Cake Shop (more by BBG) 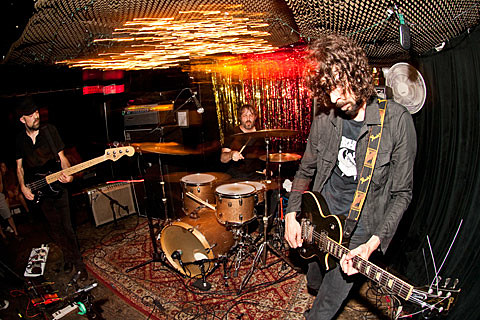 Brooklyn prog-kraut-acid rock trio The Psychic Paramount have already announced appearances at Pitchfork and Capitol Hill Block Party. Before that they'll head out for a string of dates on the East Coast. Kicking off in Quebec City, the band will head back south for dates in Providence, Boston, and Burlington before eventually ending the short tour with a show at Le Poisson Rouge on May 19th with Noveller. Tickets are on sale.

The Psychic Paramount are currently working on their new LP, so it wouldn't be too far-fetched to expect some new jams at the dates listed below.

Noveller is also on board for a show just a little more than a month later, when Sarah Lipstate will support Nadja with Lazurite at Glasslands on June 20th. Tickets are on sale for the show, one of only two US dates scheduled at the moment.

In related news, you can stream the spankin new Aidan Baker (of Nadja) and Richard Baker collaborative release Variations On A Loop (Rhythms) below alongside the recent Nadja release Excision.

All streams and dates are below.