Psychic Paramount at Cameo in July (more by Caroline Harrison) 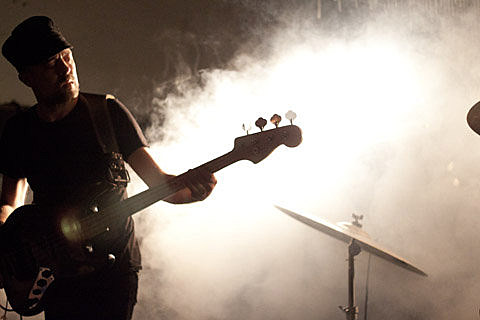 Smoke-machine-loving psychedelic noise rockers The Psychic Paramount will be touring this September. First they'll head out as the support act on The Jesus and Mary Chain's previously announced tour, which hits NYC on September 13 and 14 at Irving Plaza. Tickets for the 9/13 show are still available but the 9/14 show appears to be sold out. Just after that tour ends, The Psychic Paramount will play a third show in their hometown of NYC at ATP NY, which goes down on Pier 36 from September 21-23. They'll be playing on the Sunday (9/23) along with Godspeed You! Black Emperor, Hot Snakes, Thee Oh Sees, Braids, I Break Horses, and others.

The Psychic Paramount played Hudson, NY's Basilica Music Festival earlier this month. You can check out a really noisy video from their set, along with a list of all upcoming dates below.