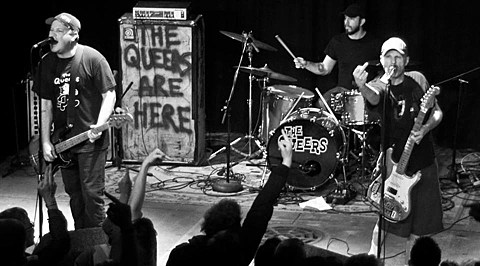 Punk vets The Queers will be revisiting the past this year when they play their second album, 1993's Love Songs for the Retarded, in select cities. They play Chicago on Valentine's Day and NYC a day later at Mercury Lounge (2/15).

They'll be doing shows, a 7 PM gig where they play Love Songs and a 11 PM set "of their Pop Hits." The early show will be opened by surf/skate punks Night Birds (who may very well be the NYC-area's best possible match for The Queers) and The Gaslight Anthem's pals The Scandals. No openers have been announced for the late show.

Tickets for both shows go on sale Friday (1/24) at noon. The Queers' only other show at the moment is opening for Screeching Weasel in Texas. All dates are listed below.

You'll also be able to catch Night Birds at other local shows, including opening the free Paint It Black show in Brooklyn and the Don Giovanni showcase. They're also on the NJ stop of Iron Chic's tour.

And in related news, we just posted a bunch of upcoming punk shows.

All Queers dates are listed, along with a full stream of Love Songs for the Retarded, below...

The Queers - Love Songs for the Retarded