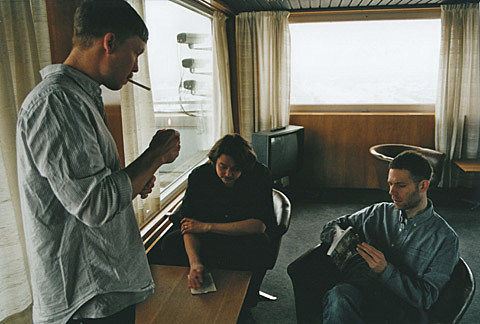 After a long weekend of overeating and couchdwelling and Kanye overload, I hope you are all nice and rested up for what is a pretty great week of shows. Here's a bunch of stuff I recommend.

Sweden's The Radio Dept are playing two NYC shows ahead of their first-ever real tour of the U.S. and Canada this week. All dates are listed below, but the NYC shows happen at Knitting Factory Tuesday night (11/30) and Bowery Ballroom on Wednesday (12/01). Both are sold out. This will be the band's first visit to our area since the 2009 NYC Popfest.

It's been a busy year for the somewhat unprolific Scandinavian trio. In addition to their fantastic third album, Clinging to a Scheme, which came out back in April, The Radio Dept. just released a new EP, Never Follow Suit, which takes the dub-heavy album title cut (also on the album) and makes it even dubbier (download both versions above), plus adds three new blissed out tracks.

The band are also finally gathering up all their non-LP singles, b-sides and EPs for a double-disc compilation, Passive Aggressive: Singles 2002-2010 which comes out early next year. A lot of their great early EPs are out of print (like 2003's Pulling Our Weight) and it'll be nice to have them all in one place. Double vinyl too for those with turntables. With music spanning from their first single through tracks off Clinging to a Scheme, it makes for a nice overview of the band...but still holds together really well. Little has changed in The Radio Dept.'s sound over the last eight years, but they are one of the best examples of "don't fix what ain't broke."

Abd if you're going to one of the two Radio Dept. shows, be sure to get there early to catch Montreal's Braids, who I just saw play in their hometown. 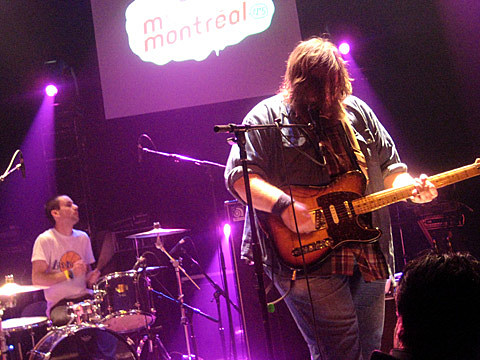 While on the Subject of Bands I Saw Play in Canada Recently, one of biggest hits of this year's M for Montreal festival were PS I Love You:

Most everyone seemed in agreement that PS I Love You were the best band of the night. The duo from Kingston, Ontario are an indie Mutt and Jeff, kind of like the Pixies with a new wave back-end. Yelper-guitarist Paul Salnier actually pulls triple duty live, playing bass parts too via a Moog bass pedal setup which is pretty cool. Drummer Ben Nelson plays heavy on the high hat a la New Order's Stephen Morris which gives their songs danceability.  Their record, Meet Me at the Muster Station, is good but, live, PS I Love You are a force.

Maybe you saw PS I Love You at one of their many CMJ shows. They're back, playing The Rock Shop on Friday (12/03) and Pianos on Saturday (12/04) and both shows are with Florida's Holiday Shores.  You should definitely catch them this time around. Two tracks from their debut album are at the top of this post. They're also giving away single "Starfield" over at their label's website through 12/02, so go get it (you gotta give them your info in return). All PS I Love You tour dates are at the bottom of this post.

Also visiting us this weekend are Los Angeles foursome Warpaint, who play The Studio @ Webster Hall on Wednesday (12/01) and Music Hall of Williamsburg on Thursday (12/02). Their debut for Rough Trade, The Fool, has gotten mostly good reviews. It's a record that has really grown on me in the last month, hitting that sweet spot between dustbowl new age goth and early-'80s post punk. Not that those are mutually exclusive terms. Spindly guitars, groovy basslines, complex percussion, dreamlike vocals... it's somewhere betweeen Haena-era Banshees and Bat For Lashes with just a smidge of Stevie Nicks. Which is a good thing if you ask me. If Warpaint aren't on the next Twilight soundtrack somebody's not doing their job.

The band are good live too, with an especially nimble rhythm section. And if you didn't like the album the first time you heard it, I urge you go give it another chance to sink in. Check out "Undertow" above, and there are a couple live performance videos further down this post along with all upcoming Warpaint tour dates. 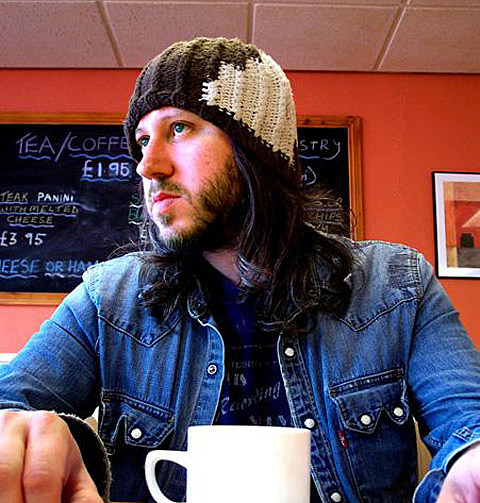 Like a lot of people, I loved the first Badly Drawn Boy album The Hour of The Bewilderbeast, which rightly won the 2000 Mercury Music Prize (at least given its competition). Damon Gough then went to Los Angeles and lost his way almost immediately after. Good songs here and there, yes, but none of his subsequent albums have been anywhere near as solid or as sonically interesting as Bewilderbeast. Yet I always give the new album a chance.

I'm happy to report that the vibe of BDB's new album -- the mouthful of a title It's What I'm Thinking Pt. 1: Photographing Snowflakes -- returns some of his debut's homespun charm. It's his first since parting ways with EMI and starting his own label and you can sense the freedom this has brought across its 10 tracks. (Parts 2 and 3 are due at some point in the future.) There may not be anything as immediately catchy as "Everybody's Stalking", but you can tell this is music Gough wanted to make, not music he thought someone else wanted to hear. It's a nice album. Give up your email address and you can download a few new songs at BDB's website.

Badly Drawn Boy plays Le Poisson Rouge this Friday (12/03) and Saturday (12/04). Badly Drawn Boy shows have always been a bit of a crapshoot. Shows are notoriously long, ramshackle affairs with extended noodling, rambling stage banter and other digressions. Gough is the only Mercury Prize winner I have ever seen to actually take audience requests, including other people's songs he has never played. (Think twice before you yell "Freebird!" at a BDB show, you may end up regretting it). But there are always moments of brilliance in there too that make you glad you went, which is I guess Gough in a nutshell.

That's the main stuff this week. A few more shows of note, day-by-day, of things not covered above follows:

Garagey soul band Fergus & Geronimo, who recently relocated here from Texas, headline a great night of music at Glasslands, that also features another bunch of recent transplants, former Arizonans The Young Friends. Also on the bill: Little Gold and We Are Country Mice.

Denver duo Tennis play Mercury Lounge, their first shows since a wave of hype packed Glasslands and Cake Shop back in August. Nice folks, but take away all that reverb that coats their recordings (as they do live) and the songs aren't quite as magical. The night's line-up is pretty good overall, with Family Portrait, Miracles of Modern Science and La Big Vic. Tennis also open for The Walkmen (and a slimmed-down School of Seven Bells) at Terminal 5 the next night.

Lykke Li's performance tonight at Le Poisson Rouge is sold-out but you can download her ace new single, "Get Some," for free (and catch her in May when she returns). Can't wait to hear the rest of the album.

Peter Hook and his new band, The Light, plays Joy Division's Unknown Pleasures in full at Webster Hall, plus other JD classics. Peter Hook's son, Jack, provides most of his dad's classic basslines, as Hooky is singing and says "singing bass players, it never works." (Um, Beatles? Rush? Chameleons?) He'll still play in the bits where he's not singing. Videos from UK performances sound okay, but the whole thing leaves a bad taste in my mouth. It doesn't stop here, Hook plans to record some Joy Division songs from an EP next year, provisionally titled (by me) either "Why Does This Exist?" or "Bad Idea."

A much better idea would be to go to Shea Stadium for the Kanine Records' Wear Your Favorite '90s-style Christmas Sweater Holiday Party, featuring a ton of rad bands: Grooms, X-Ray Eyeballs, Eternal Summers, Dream Diary, and We Are Country Mice. I'm not even sure what a '90s style Christmas sweater is though. Did they make 8-Ball Christmas Sweaters? 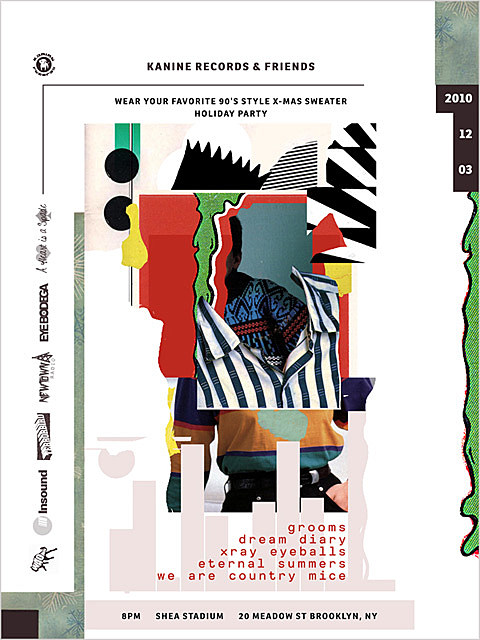 Boston alt-rock stalwarts The Figgs play Bruar Falls with local indie upstarts Diehard opening. Sure to be a love-fest.

Over at The Bell House is the annual Biblioball, a charity concert organized by the bookworms at The Desk Set and is raising money for Literacy for Incarcerated Teens. In addition to Harry & the Potters, Crazy Pills, DJs, trapeze artists, raffles and more, the Biblioball marks the first NYC performance from Baltimore synthpop group Raindeer whose bubbly EP is a free download at their Bandcamp page. They've got a release coming out on cassette-only label Fight the Future sometime next year. So go support a good cause, hear some cool music and maybe your sexy librarian fantasy might just come true. Though probably not. 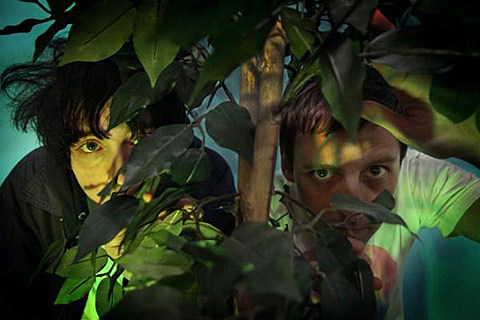 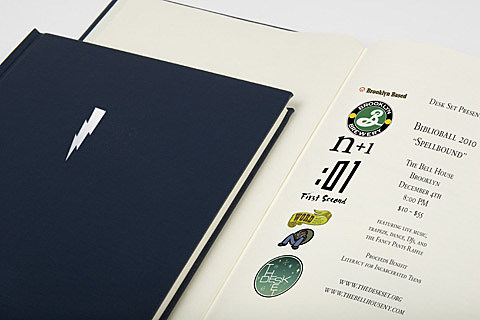 Recreating in part my Northside Festival 2010 showcase, North Highlands and The Luyas play Glasslands, with Twii the Humble Feather and Little Anchor also on the bill. This is likely to be North Highlands' last show for some time as they're promising to get serious about recording that debut album. I for one can't wait and urge you to go see them play, they are really on it these days. The Luyas have released a song called "All New Tiny Head" from their upcoming Dead Oceans debut which is going to be called Too Beautiful to Work. Download it above.

That's all This Week in Indie Has room for this week. Tour dates, flyers and videos are below.

--
Warpaint - "Undertow" on Under Ether

Warpaint - "Bees" on Your Tru.ly 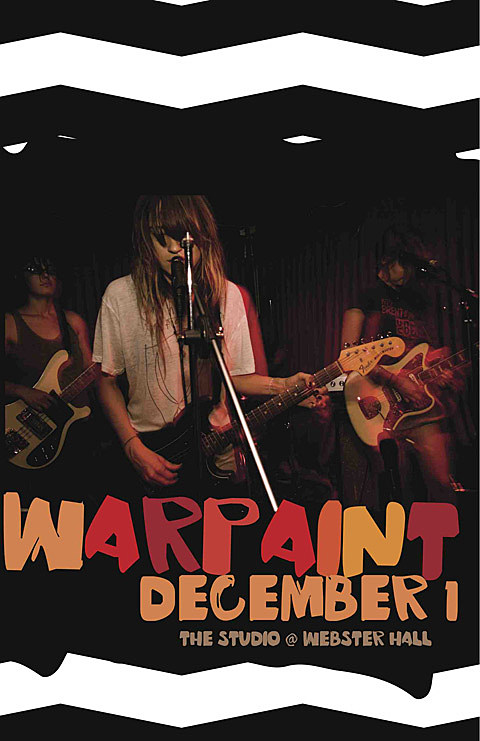