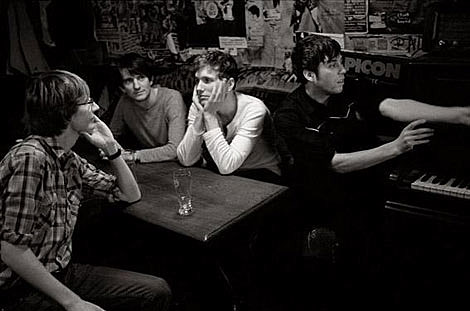 London's The Rakes are back in New York this week (Monday 4/6 at Bowery Ballroom; 4/7 at Union Hall) for their first shows in almost two years. The band took a break after their second album, Ten New Messages (which didn't get a U.S. release), but reconvened last year in Berlin to record their new album, Klang!, which was just released in the UK. It's been two years since The Rakes last played NYC. Klang! was recorded in Berlin with producer Chris Zane (Les Savvy Fav, The Walkmen). Why Berlin? Singer Alan Donohoe told Drowned in Sound:

The London music scene is so dull right now - it's like wading through a swamp of shit. We just wanted to be somewhere more inspiring...The album is raw, playful, exciting, complex and schizophrenic - much like the personality of Berlin itself. It couldn't be more of a fitting place to record it. Chris has found this raw but massive sound, it's sharp like razors; like pouring boiling bleach on our peers.

While you couldn't call Klang! a big departure from their two previous albums (tales of urban ennui set to spiky guitars and nervous rhythms), it's another solid record from one of Britain's more underrated bands. Check out the album's first single, "1989," at the top of this post. (Its video is below.) And of the UK Class of 2004/2005, the Rakes have always been one of the best live bands, playing even faster than on record, and are as tight as they are tightly-wound. But for me it's singer Donohoe's awesomely spazzy dance moves that really make The Rakes so much fun to watch, some of which can be seen in a live video at the bottom of this post. below. Tickets are still available for both the Bowery (The Dig and Sean Bones open) and Union Hall (Radical Dads open) shows.