The Raveonettes @ Siren Fest in July (more by Tim Griffin) 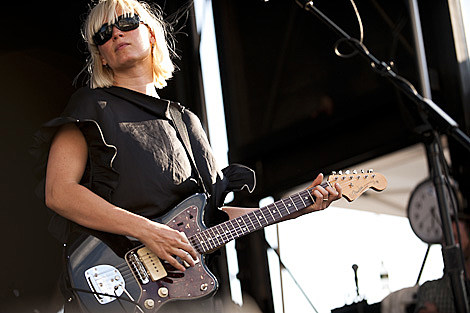 In addition to their NYC shows (October 14th at Webster Hall and Oct. 18th at Music Hall of Williamsburg), the Raveonettes will be playing a late-starting set (11pm) at Maxwell's on October 13th. Tickets are on sale.

Unlike their other shows, the Maxwell's gig won't be with Austin rock band The Black Angels, who are opening the October leg of the Raveonettes' tour.

The Raveonettes' new video for "Last Dance," off In And Out Of Control, which came out October 6th on Vice Records, is posted below. It's directed by Matthew Lessner, the same video whiz who gave us Dirty Projectors on a mountainside. That plus videos of The Raveonettes in the studio, answering questions and live at Rough Trade...

(extremely long...) Fan Q&A With Sune of The Raveonettes

Sune Rose Wagner (The Raveonettes) - What's In My Bag?

The Raveonettes - Oh, I Buried You Today Live at Rough Trade. 6th October 2009