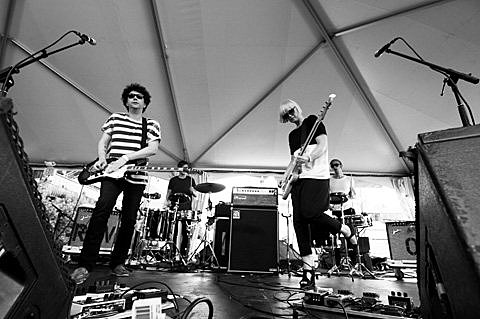 The Raveonettes have a few upcoming (mostly festival) dates this summer including two in Chicago. They appear to be revealing some club dates for the fall for what will presumably be their first North American tour since Sune was hospitalized. Those dates include a NYC show at Webster Hall on October 5 with Melody's Echo Chamber. Tickets for that show go on sale Friday (6/8) at noon with an AmEx presale starting Wednesday (6/6) at noon.

The Raveonettes released their new EP, Into the Night, this past April. You can download the title track and "Night Comes Out" via widgets below in exchange for your email address.

In related news, Sune mixed Correct Behabior, the new Eternal Summers album which is due out on July 24 via Kanine. You've already heard "Millions" off that album, and the band just revealed another new track, "Wonder" which you can listen to over at Pitchfork. Eternal Summers have NYC shows coming up too.

A list of all currently known Raveonettes dates and widgets below...