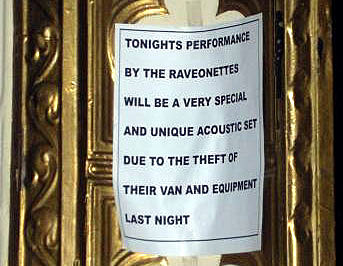 Tthe Raveonettes played Maxwell's in NJ on October 4th. Some time after their October 5th Boston show, and before their October 7th show at Warsaw in Brooklyn (which they played acoustic), their van and gear were stolen (Brian Jonestown Massacre style). Thanks to Kevin for passing along this note from the band's tour manager: