photo: The Replacements in Chicago in April (more by James Richards IV) 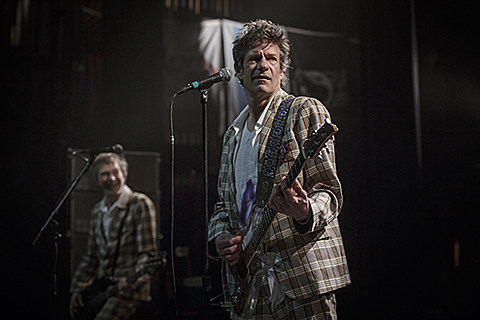 The Replacements had been on another leg of their reunion tour, but it looks like it may have come to an end over the weekend. Pitchfork points out that at their Primavera Porta set, Paul Westerberg said it would be the last time they played together, and smashed his guitar at the show.

A Billboard article adds that the band had plans to play makeup dates for their cancelled Pittsburgh and Columbus shows, but have now cancelled those as well. The article also points out the band have no plans to return to the studio, after having recorded some material, said a new album was "likely" coming, and debuted a new song live.

Paul had also been wearing shirts with different letters on the front and back that had been spelling a sentence over the course of the tour. It's been completed and reads: "I have always loved you. Now I must whore my past."

In other news, Replacements (and Guns N Roses) member Tommy Stinson is playing NYC on July 23 at Bowery Electric with Simon Doom. Tickets are on sale.