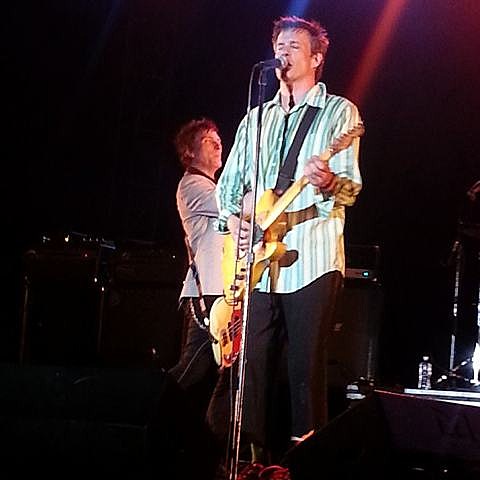 The Replacements (Paul Westerberg, Tommy Stinson, plus fill-ins Dave Minehan [guitar] and Josh Freese [drums]) played their first show in 22 last night (8/25) at Riot Fest Toronto. Kicking things off with "Takin' a Ride" from Sorry Ma, I Forgot to Take Out the Trash, their 22-song set hit most of the highlights of their catalogue, including "I Will Dare," "Alex Chilton," "Kiss Me on the Bus," "Bastards of Young," "Can't Hardly Wait," and a few covers too. You can listen to the full show (via Slicing Up Eyeballs), watch a bunch of video from it and check out the full setlist below.

The Replacements, who played right after Iggy & the Stooges in Toronto, will also play Riot Fests in Chicago and Denver. No other shows have been announced, but Paul Westerberg says he has not ruled out touring...or recording. We shall see.

Setlist and audio / videos from The Replacements' Riot Fest Toronto show, below...

The Replacements, 'Left of the Dial', @ Riot Fest Toronto