The Replacements in Forest Hills last week (more by PSquared) 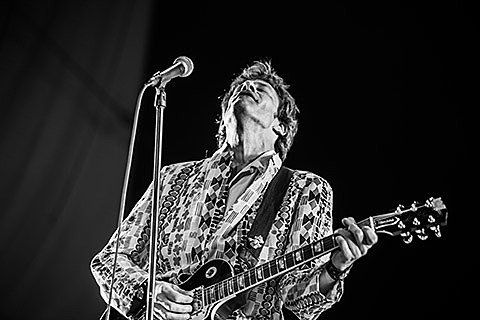 In a recent Rolling Stone article titled The Replacements: The Greatest Band That Never Was, it was revealed that the band say it's "likely" they'll make a new album. An excerpt reads:

Now, the Replacements say they'll likely make an album at some point in the future. Westerberg, who often writes on piano as well as guitar, has plenty of songs in the hopper. One candidate for inclusion might be called "Are You in It for the Money?"; another is titled "Dead Guitar Player" (which he says was written before Dunlap's illness).

If an album does come out, it would follow 2013's Songs for Slim EP (of covers) which remaining original members Paul Westerberg and Tommy Stinson recorded to benefit former guitarist Slim Dunlap, who had suffered a stroke. It would otherwise by their first full length under The Replacements name since 1990's All Shook Down.

The Replacements brought their reunion tour to NYC for an excellent show at Forest Hills Tennis Stadium this past Friday (check out our review and pictures). If a new album does come, here's to hoping it's as spirited as they were live.