cheerleader M.I.A., as seen in the new Madonna video 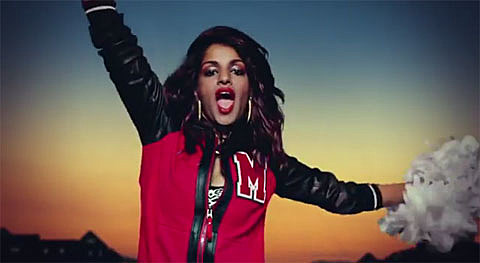 As M.I.A.'s Universal Records labelmate Lana Del Rey knows now too, a shitstorm of bad press and reviews can be a painful sting. M.I.A. went from much-loved to much-hated almost overnight after the release of her last album. And like L.D.R., a lot of the negativity towards M.I.A. focused on her being fake and rich. Who knew what the future would hold for the northern Sri Lankan South London rebel activist rapper.

Things have been quiet on the M.I.A. front for a year, but then came "new" song "Bad Girls" which "premiered" on Pitchfork last week along with the tag "Best New Track" (a title that was also awarded to "Video Games" in 2011), followed by a new video for the song which has already racked up over 3 million views on YouTube in less than three days. Why did I put "new" in quotes? Well, because Pitchfork actually gave the same song "Best New Track" when it first appeared on Vicki Leekx, a mixtape M.I.A. released at the end of 2010, though the 2010/2011 version was not exactly the same song. It has been reworked a bit, and is now "complete". Watch and listen below.

Meanwhile, M.I.A.' Universal Records labelmate Madonna went ahead and announced a new album called MDNA which features a couple of guest singers, or more specifically: Nicki Minaj, and yep, M.I.A. Madonna also packaged this I'll-show-Lady-Gaga-who's-boss-return with a spot as Superbowl Halftime performer which came with the news that Madonna would be bringing along some friends (yep, Niki Minaj and M.I.A) (and maybe LMFAO and Cee-Lo). We'll find out exactly what goes down with that today.

UPDATE: Cee-Lo & LMFAO were in fact there, and this happened:

M.I.A. flips the world the bird on the Superbowl 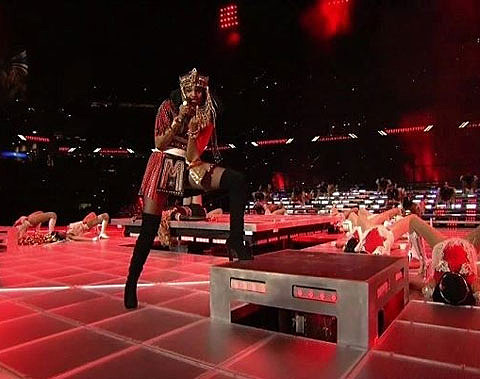 Watch the new Madonna video for "Give Me All Your Luvin'" (Feat. M.I.A. and Nicki Minaj), which has over 6 million views in three days (and has football players in it too), with the new M.I.A. video too, below...