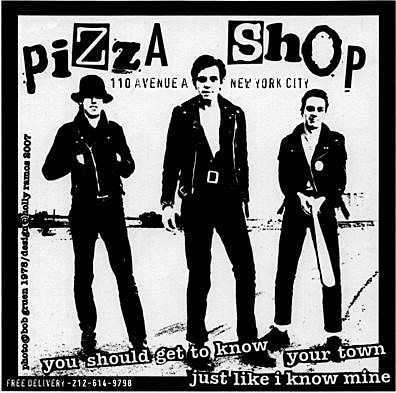 The East Village rocker boys behind Bowery Electric, Jesse Malin and Johnny T, along with Kevin Cole (of Two Boots fame), have teamed up, all in the name of pizza. The rock 'n' roll trio is the force behind The Pizza Shop, located on Avenue A and 7th Street, which officially has its grand opening tonight [June 25, 2008]. The spot has been serving pizza since the 1960s, but the new owners decided to gussy up the space a bit......All the pizza boxes are limited edition prints. According to a press release we received: "Around 1500 of each box style is made and then never reproduced. The first one being a photo of The Clash from 1979 taken by world famous rock photographer Bob Gruen. Each box will have a different image created by well known and local artists featuring their particular style and medium and these boxes are free with a purchase of any pizza." As we mentioned earlier, tonight's the opening, so if you're in the hood, stop by for your very own signed Bob Gruen pizza box!" [PAPER]

Pizza Shop (an actual pizza place, not a club or bar) is right next door to Niagara, a bar that Jesse Malin also owns, and where you'll find the famous mural of The Clash's Joe Strummer on the outside wall.

P.S. for amazing vegan pizza check out Vinnies on Bedford.