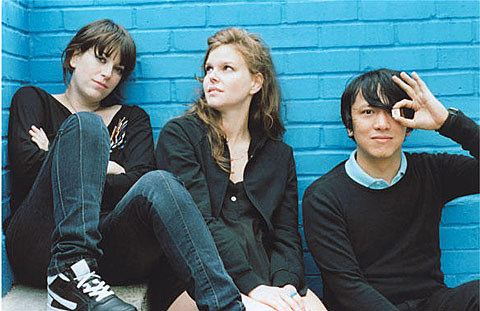 As mentioned, Sleaford Mods will be playing their first-ever North American show next month at The Wick on November 29, which BrooklynVegan is presenting. Pittsburgh's Gotobeds will also be playing that show. We pleased to announce that rounding out the bill will be Brooklyn's (somewhat) back-in-action The Rogers Sisters, making for a very solid show. Tickets are still available.

If unfamiliar, The Rogers Sisters (Laura and Jennifer Rogers plus Miyuki Furtado) formed in 1999 with a sound somewhere between ESG, Gang of Four and The B-52's (maybe a little Cure too), putting them squarely in the postpunk resurgence scene that spawned Interpol, Liars, Radio 4, and Yeah Yeah Yeahs. The band made three albums -- two on Troubleman LTD and one for Too Pure -- before calling it quits. Their spiky 2002 debut, Purely Evil, holds up especially well but all three are worth checking out. The band broke up in 2007 but began playing shows again this year to help benefit their friend Letha Rodman Melchior who lost her battle with cancer last month.

Before the Sleaford Mods show, The Rogers Sisters play the Letha Rodman Melchior memorial benefit at Rough Trade on November 8 with Thalia Zedek Band, Antietam, Cynthia Nelson, Tara Jane O'Neil and headliners Versus. Tickets are still available for that show as well.

Rogers Sisters videos and streams, below...

The Rogers Sisters - I Dig a Hole

The Rogers Sisters - Why Won't You