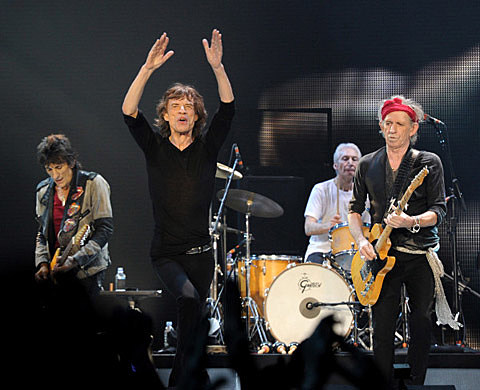 The Rolling Stones have announced a new set of North American dates booked for May/June, that include stops across the continent. So far the Northeast is in the band's sights, but no NYC date thus far. But there is plenty of room in their schedule for one.

The tour, titled "50 & Counting," will celebrate five decades of the Stones, and will include Mick Taylor, a member from 1969-74, as a special guest on all dates.

The band will treat their generations of fans to an evening of classic Stones hits like 'Gimme Shelter', 'Paint It Black', 'Jumping Jack Flash', 'Tumbling Dice', and 'It's Only Rock 'N' Roll', curated with lesser known gems, and a cover or two.

The stage design for the tour is based on the band's ubiquitous tongue and lips logo, which extends out into the crowd, allowing the Stones to interact directly with their audience. Known for their ground-breaking sets and use of cutting-edge technology, the Stones' set design will feature video screens and special effects that will enhance the high-octane experience of attending a live Stones' show.

All tour dates are listed, along with video, below.