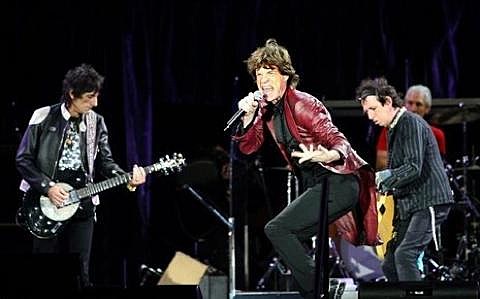 To warm up their four upcoming announced dates, The Rolling Stones played their first of what most likely will be multiple intimate surprise gigs last night (10/25). Last night's show took place at Trabendo in Paris and 350 tickets were sold out at $20. They revealed the setlist in realtime on their twitter, and you can check out a list of the 12 songs they played below. Also below is a video of their set (the audio is pretty good but the filmer is crouched behind other crowd members because no videophones were allowed).

Their four announced dates include shows at Newark's Prudential Center on December 13 and 15. Tickets for those shows go on general sale today (10/26) at noon. The presale happened and tickets are already on StubHub priced from $319 to roughly $100,000.

Setlist and video below.

Rolling Stones at Trabendo - 10/25/12 Setlist:
Route 66 (Nat King Cole)
It's Only Rock 'n' Roll (But I Like It)
Shattered
When the Whip Comes Down
Champagne & Reefer (Muddy Waters)
Doom & Gloom
Miss You
Start Me Up
Midnight Rambler
Tumbling Dice