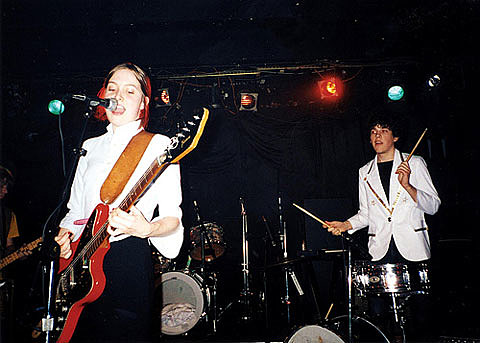 The Rock Shop, which has put up a bunch more shows since our last post on it, will be hosting a free first-look at the venue tonight (7/8). The best part is that it's also a first-look at The Rondelles, the reuniting Teenbeat band whose only other NY show is the sold-out Bell House show on Friday. The band, originally from Albuquerque, released two stellar LPs in the late-'90s/early-'00s plus loads of other collections, EPs and 7-inches. Their style of riot grrl-era punk, characterized by their drummer-as-keyboardist, was perhaps cleanest and most compressed on their Teenbeat LP, The Fox, which the song above is from. Others, like 2001's collection Shined Nickels and Loose Change, are more four-track basement-punk, with songs barely over a minute and covers that range from a church hymn to "Like a Prayer." They played a reunion show in 2007 in New Mexico, but their last New York show was most likely around their breakup in 2001 (drummer Oakley Munson went on to play in NY band the Witnesses). The Love Loves open.

More info on the band from Rock Shop, Rock Shop's entire July schedule, and live videos are below...

Our "grand opening" will occur on August 2. However, if you want your first shot at seeing the Rock Shop in action, come to a FREE FREE FREE show with Teenbeat Records' legends, The Rondelles, as they are reuniting for a very special weekend! They will have some friends in tow as well, so come celebrate the first show in our rock space and check out the digs!

*The Rondelles are an indiepop band originally from Albuquerque, New Mexico. The band, which formed in the late 1990s, when the three members were still in high school, originally consisted of Juliet Swango on guitar and vocals, Yukiko Moynihan on bass, and Oakley Munson on drums and keyboard. At live shows Oakley was known to play the drums standing up while hitting the keyboard with his drum stick.

In Albuquerque, the Rondelles were part of a small cadre of indiepop bands that often played together. Among these other bands were The Shins (and Shins precursor Flake Music), The Alarm Clocks, The Young Adults, and Ponies.

The three members of the Rondelles were also three-quarters of the final lineup of the Albuquerque sci-fi-themed pop-punk act, LuxoChamp, behind singer-guitarist Brad Beshaw. The band later moved to Washington, D.C. and has since disbanded.