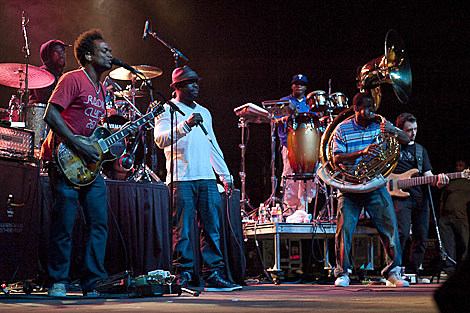 As Pitchfork reported, The Roots Picnic will be happening again this year at Philadelphia's Festival Pier on Penn's Landing, on Saturday, June 5th. ?uestlove announced part of the lineup via a Twitvideo (which you can see below), and it includes of Mayer Hawthorne, Clipse, the Very Best, Neka, Tune-Yards (a recent Questlove favorite), Das Racist, Bajah & the Dry Eye Crew, Pattern Is Movement, headliner Vampire Weekend and The Roots (with two side-projects, Black Thought's Money Making Jam Boys and ?uestlove with DJ Jazzy Jeff). He also says that the fest will be reuniting a certain black hat/gold chain (and it could be assumed, Adidas)-wearing hip-hop crew.

Tickets go on sale Friday, March 5th at 10am.

Picture sets from last year's Picnic are here. Pictures from a 2009 show at Brooklyn Bowl that featured more than a few of the members of this year's lineup are here. See ?uestlove's video for yourself (where he also announces that it's the Roots' one year anniversary on Fallon - congrats!) below...