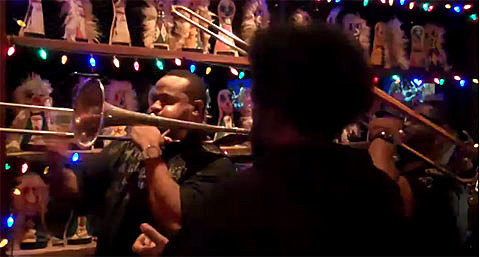 According to (de)vices, "For New Years Eve 2010, The Roots played 3 sets from 11:00PM to 4:00AM, with DJ'd interludes by ?uestlove. This man just doesn't quit." It's true (the man doesn't quit) and you can see the Prince fan and friend DJ again at Brooklyn Bowl on January 6th, January 13th, January 20th, January 27th, February 3rd, February 10th, February 17th, and February 24th (and probably after that too). Tickets are on sale for all of the dates. He'll also honor Martin Luther King with a show at Cielo on January 16th.

The Roots play live again on January 15th at Showcase Live in Foxboro, MA (and constantly on Fallon).

At midnight on New Year's Eve, the band literally came marching in. Watch the videos below...