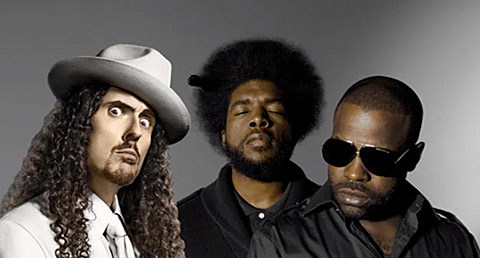 Would you call it Weird Roots? Madlib and Doom aligned in 2004 to form Madvillain. Their debut LP Madvillainy for Stones Throw included the song "Accordion". Now The Roots have banded together with Weird Al (!) to record a cover of "Accordion". Listen below.

Weird Al was on Fallon last night (hence the meeting up of the two artists), though the cover is not what was performed on air (it was performed during soundcheck). Listen to the cover (which Questlove posted online), and watch the Roots and Al perform "Beer Barrell Polka" (a Fallon web exclusive), below. No word on if "Weird Roots" will release any more material, but you can hear a new-er Madvillain song from their forthcoming LP in a Stones Throw podcast.

As previously discussed, The Roots are in the midst of a series of Blue Note Jazz Fest shows at the Blue Note. Tonight (6/21), Questlove presents the second night of Mo' Meta Blues I, his supergroup consisting of Booker T on organ/keyboards/vocals, Eric Krasno on guitar, and Christian McBridge on bass. Tomorrow (6/22) is Mo' Meta Blues II, The Roots tribute to the 25th anniversary of the seminal Paid in Full LP. Rakim will join the crew at the venue as the band performs the album in its entirety. All four remaining shows are sold-out (early and late each night), but 21-plus'ers can still get in at the bar on a first come, first served basis.

The Roots will also perform at the launch of "Rebuild the Dream" at Town Hall in NYC on Thursday (6/23) "Van Jones calls this new wave of energy the "American Dream Movement". Along with The Roots, artists/DJ Shepard Fairey and other celebrities will be appearing at the campaign commencement." We're unsure of how you can get yourself in this show, but you can watch it online and learn more at their website.

Doom is (supposedly) scheduled to appear at Rock The Bells 2011.

Check out both versions of "Accordion" below.