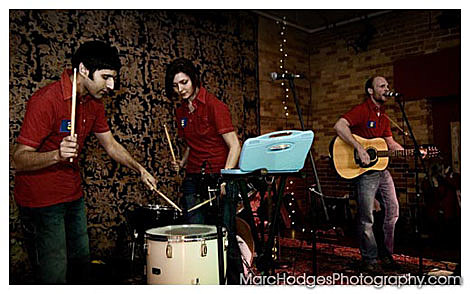 "I'd seen the Rural Alberta Advantage a number of times but never on a stage this large, and the environs seemed to be as foreign and novel to the band and it was to me. Any worries that they wouldn't be able to adapt to the setting were immediately put to rest, however - the charm and appeal of their simple folk-rock songs came across loud and clear. It never fails to amaze me how the trio are able to do so, so much with so little. Behind the kit Paul Banwatt (celebrating his birthday) continued to demonstrate why he's one of the very best drummers in the city, Amy Cole was indispensable on percussion, keys and backing vocals and of course Nils Edenloff, who pens the songs and delivers them in that plaintive, Mangum-esque bleat. It's heartening to see that the band is finally finding the attention and success they deserve - I've long said that people simply need to hear them to love them, and I think it's finally happening." [Chromewaves in Toronto, December 1, 2008]

As Chromewaves points out it's hard not to mention Neutral Milk Hotel after a first listen to Toronto's The Rural Alberta Advantage. I'm told (thx Brandon & Johnny) that tonight (1/27) at Pianos (with The Loom) in NYC is their first US show. Their second is February 6th at Union Hall.