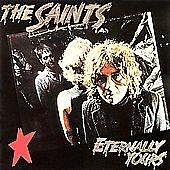 The Saints are an Australian rock band, formed in Brisbane in 1974. They are considered to be one of the first and most influential punk groups. [Wikipedia]

Still playing (reunited or whatever) with one original member (founder and frontman Chris Bailey), The Saints are touring the United States this month. They have shows at Maxwell's and Midway, end elsewhere....

New York, NY - Brisbane Punk pioneers, The Saints , will bring their live set to their avid American fans beginning October 25, 2007 in select cities spanning from the East Coast down to Austin for the FUN FUN FUN FEST. Named one of the three most influential bands of the 70s, next to the Sex Pistols and the Ramones by Sir Bob Geldof, the group will be touring in support of their successful release of Imperious Delirium (Wildflower Records, 2007), which includes 11 new songs recorded at Amsterdam's Stollywood Studios. 2007 also saw the release of the U.S. issue of their box set, The Greatest Cowboy Movie Never Made (Wildflower Records 2007).

Filed Under: The Saints
Categories: Music News, tour dates, video
Comments
Leave A Comment
BrooklynVegan Blog Radio on SiriusXMU: Playlist for April 11, 2022
The Saints’ Chris Bailey, RIP
The Fall’s 21 Best Covers, from The Beatles to Sister Sledge
24 New Songs Out Today
Japandroids covered The Saints with Craig Finn, made a playlist of influences ++ pics from Chicago
Kvelertak made us a playlist of their indie rock influences for Beachheads LP