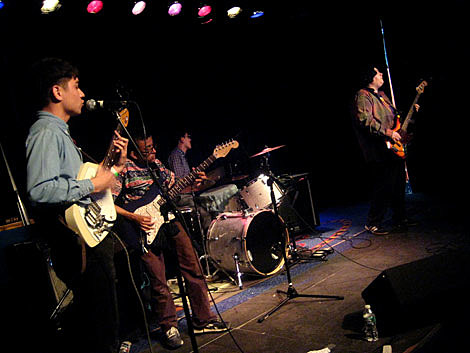 NYC Popfest 2010 wrapped up on Sunday (Thursday coverage here) with an all-day event at Littlefield. One of the discoveries of the day (and of the Fest) for me was Oxnard, CA's Sea Lions who looked like they formed at the local Youth Center and sounded like a poppier (and more together) version of Cause Co-Motion. They exuded a kind of naive charm with super-catchy, no-pretense songs like "Oh No," "Good Feelings" and "Beautiful Day."

Then I remembered that Seattle blog (and old friend of mine) The Finest Kiss had picked their "Let's Groove" 7" as his Single of 2010, to which he wrote:

The Sea Lions aren't quite surf, not quite punk, and not quite twee.  What they are is ballsy to make the A-side of their first single an instrumental, but the Sea Lions seem to know what they're doing. In a year where sun, surf and sand were recurring themes around the indieverse the Sea Lions did it the best. No trendy reverb or washed out vocals, just straight up pop.

The Sea Lions have stuck around the East Coast to play some more shows. Maybe you saw them last night Bruar Falls with fellow Popfest attendees Neverever. They play Bruar Falls again tonight (5/25) for a free show, and then Shea Stadium on Friday (5/29). Both shows are with Toledo, OH's Handglops. Check out two Sea Lions MP3s at the top of this post and all Sea Lions tour dates are below.