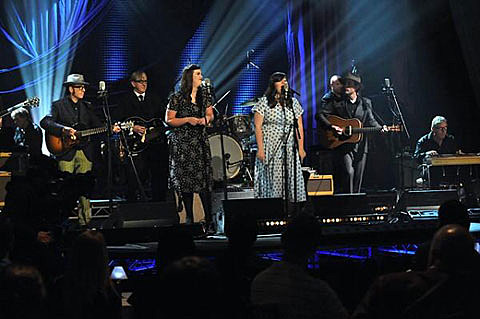 Jack White. T-Bone Burnett. Carl Broemmel of My Morning Jacket. These three stellar names all had their hand in recent/upcoming releases from The Secret Sisters, a pair of harmonizing not-secret Alabama sisters that dabble in classic-country inspired rock. The duo released their debut 45 on Third Man Records in August featuring a ripping cover of Johnny Cash's "Big River" (Jack White fan's take note, it rules), and are prepping their T-Bone Burnett-produced self-titled debut (featuring slide guitar from Carl Broemmel) for release on 10/12. Stream a few songs at their site, and more at their myspace. In preparation, the duo will play a solo show at Joe's Pub TONIGHT (9/16), tickets are still available.

It's the same place that Carl Broemel will bless on 10/20 on his night off from Terminal Five shows with My Morning Jacket.

Secret Sisters are also on board to play the Academy of Country Music Honors on 9/20 in Nashville, as well as NYC again one month later (10/20) as part of The Speaking Clock Revue, T-Bone Burnett's benefit show at Beacon Theater (with Jim James of MMJ). Tickets go on AMEX presale on Monday (9/20) and go on sale to the general public on 9/27 at noon.