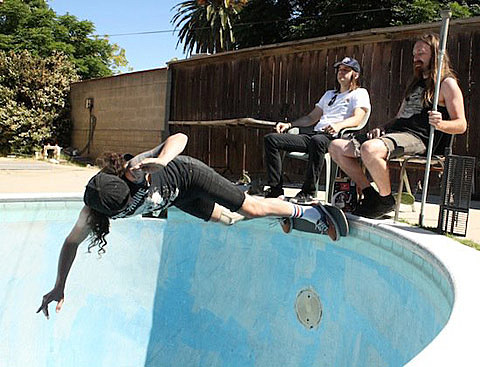 The Shrine are California through and through, embodying both the stoner grooves and the thrashy skate punk of the area in the 80s and 90s. The band's new effort, Primitive Blast, is their second long-player and is available now via Tee Pee Records.

Primitive Blast features the Black Flag/Blitz/Thin Lizzy-style burner, "Freak Fighter," the subject of the new Scion A/V produced video which we're premiering below. "Freak Fighter" has no qualms with wearing its influences on its sleeve, clearly nodding to old skate videos and featuring guest appearances from people like Chuck Dukowski (Black Flag) in between live footage/stage diving mayhem. Check out the Coan Buddy Nichols-directed video below alongside all (West Coast only) tour dates.