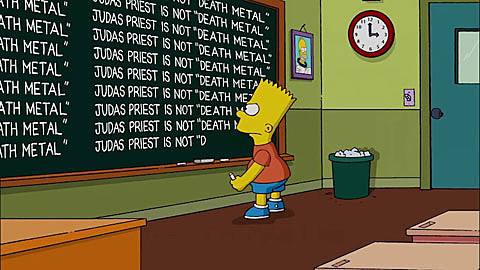 This coming August, all 24 seasons of The Simpsons will be available to stream on FXNOW, an on-demand video app for FX, FXX and FXM networks. As the longest-running show in television history, that's a lot of Simpsons action -- 530 episodes, apparently, which is enough to wipe out almost a year's worth of productivity. Time to invest in a new couch.

Recently, The Simpsons made a heavy metal no-no when they called Judas Priest a "death metal" band on January 5 episode. Judging from the clip of the offense below, during which Judas Priest plays "Respecting the Law", they also managed to stereotype all Swedes as death metal fans. Amidst outcries of "not trve,", The Simpsons were quick to correct the error via this past Sunday's opening blackboard gag.

Watch the offending clip below...