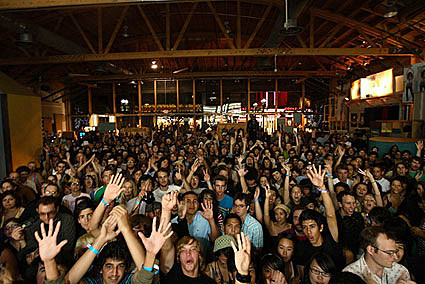 Sonic Youth's final USA performance of the Daydream Nation album happens this Saturday July 28th at the historic McCarren Park Pool in Greenpoint, Brooklyn. The Slits (still reunited) are opening, and the show is now sold out. Want to win tickets? E-mail BVCONTESTS@HOTMAIL.COM (subject: Daydream), and let me know what the last show you saw was. Two winners will be picked at random, contact and awarded a pair of tickets (by 5pm today). Include your first and last name for list.

The Slits are also playing in Philly tonight (July 27), and then a few places in California.

The official McCarren Pool 'Smells Like Records' afterparty is not Saturday night. Instead it's happening on Sunday at The Living Room. The lineup: 7 Tall Firs, 8 John Wolfington, 9 Michelle Cassias w/ Tony Scherr, 10 Chris Lee, and @ 11 Tony Scherr. Sonic Youth's drummer Steve Shelley will be playing drums for John Wolfington and Chris Lee. Tall Firs are on Thurston Moore's Ecstatic Peace label. It's sure to be a Sonic Youth-filled evening.

In other (depressing?) Sonic Youth news, the band will be releasing a compilation via Starbucks - the new home of Joni Mitchell (and of course Paul McCartney). Eddie Vedder, Jeff Tweedy, David Cross, Beck, and others are part of the Sonic Youth comp as well.