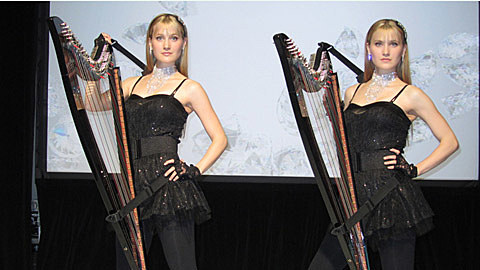 Just when you thought the week was going to pass without an Iron Maiden dual harp cover, the Harp Twins deliver a suitably angelic performance of "Dance of Death." Wait. . .what? Indeed, worry not, I didn't mistakenly huff ether: The Harp Twins are a real thing. Perhaps you've even heard selections from the Double Mint-identical sisters, Camille and Kennerly Kitt, playing at finer buffets. They've cut two records, Harp Attack (hard rock covers) and Harp Fantasy (movie/TV covers), and have upped the harp equivalent of irons before, previously plinking "Fear of the Dark." Their fingers are nimble, though the 'we're on a boat!' stage presence might need a little work. (Same goes for the 'that's not my fart' head movements, but, hey, maybe I'm jealous.) Still, if you forgot to get a May Day present for your bud before the Wicker Man burning, here it is. Stream it below.

Of course, the Harp Twins aren't alone. Welcome to the wonderful world of weird metal covers. Heck, in the past two weeks, we've seen a flood of new stars. Chicago's Rob Scalon recently turbo-picked through Slayer's "War Ensemble," utilizing the bane of every bus commuter: the ukulele. It's actually not as horrifying as that reads. Plus, his squeaky clean execution goes a ways to move it beyond novelty.

That said, it can't even step to The Soft Pink Truth for pure bananarama-ness. Why do the Heathen Rage?, the newest album from Drew Daniels of Matmos, might inspire a kvlt kvetch conniption, taking black metal standards and re-doing them as Hi-NRG rave bangers. Corpse paint to day glo in mere seconds. (The record is subtitled ""Electronic Profanations of Black Metal Classics.") The record features guest vocals from Antony Hegarty (Antony and the Johnsons), Terence Hannum (Locrian), Jenn Wasner (Wye Oak) and more. Thrill Jockey will release that one into the wild on June 17. Preorders are up now.

Poking around, one finds a ton of this stuff, since there's nothing like tweaking the over-serious by trading br00ful timbres for the incongruous. Soon, you gravitate to favorites and have trouble listening to the originals after indulging. For example, it's difficult to separate Gleb Kanasevich's clarinet cover of Necrophagist's "Fermented Offal Discharge" from Muhammed Suiçmez's O.G. shred fest after hearing it once. Same goes for Opium Jukebox's Bhangra Bloody Bhangra, the record nerd curio that de-blackened Sabbath classics and redid the doomfathers as bhangra body-movers. But, lest you think these covers are solely the domain of outsiders, there's Mr. Fog. Last year, his group, the UK black metallers Ewigkeit, turned a Burzum tremor into. . .wait for it. . .a dubbed out reggae slow jam. Well played, sir. Well played.

And, yes, we've only dug down as far as our pinky nail here. Hopefully more weird is yet to come courtesy of those with inexhaustible free time.

All of the metal covers mentioned in this post are streamable below.

Harp Twins - Fear of the Dark