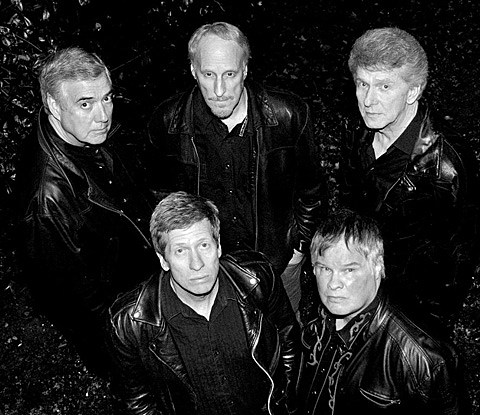 Seattle garage rock legends The Sonics are back with This is the Sonics, the band's first new album in almost 50 years. Original members Jerry Roslie (keyboards/vocals), Larry Parypa (guitar/vocals) and Rob Lind (sax/harmonicavocals), along with bassist Freddie Dennis (the Kingsmen, the Liverpool Five) and drummer Dusty Watson (Dick Dale, Agent Orange), went into Seattle's Soundhouse Studios with producer Jim Diamond (The White Stripes, Dirtbombs) for the new album which was recorded in mono and retains that essential Sonics grime and grit. Hear for yourself on single "Bad Betty" which you can stream below. The album's out March 31 via the band's own Revox Records.

The Sonics, who've been back in action since the mid-'00s and play NYC every once and a while, will hit the road shortly after the album's release and will play two NYC-area shows: April 8 at Irving Plaza and April 9 at The Stone Pony in Asbury Park, NJ. Both of those shows are with Barrence Whitfield & the Savages and tickets go on sale to the general public on Friday (1/23) at 10 AM. You can get tickets early via a BrooklynVegan presale that begins Thursday (1/22) at 10 AM. PRESALE PASSWORD HERE.

All tour dates are listed, along with the new song, streams of some of their '60s classics, below...