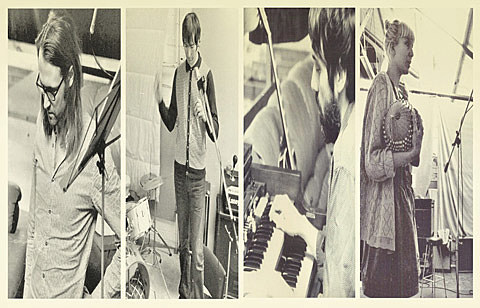 One of my favorite records of 2010 was Celeste by UK group The Soundcarriers. I wrote at the time:

Nottingham's The Soundcarriers take a trip in the time machine visiting Serge Gainsbourg, Scott Walker, Neu!, Ennio Morricone and end up landing on the moon two weeks from tomorrow. Celeste is immaculate without sounding clinical, the musicianship impressive, and the attention to detail spotless -- from the production to the truly lovely packaging of the gate-fold double LP.

Methodical workers, the band have taken their time to create its follow-up. We got a single, "Boiling Point," two years ago and now the band have released Entropicalia, which came out a couple weeks ago via Ghost Box. It was worth the wait, with 10 tracks of groovy basslines, baroque psychedelia, and Brazil-influenced vibes. Perfect for your space age bachelor pad. The album crescendos with the 12-minute krauty freakout, "This is Normal," which features a spoken word piece by Frodo himself, Elijah Wood. Midlake's Jesse Chandler plays on two tracks as well. You can stream portions of the album below, and the whole thing via Rdio.

The vinyl packaging, as you might imagine with something like this, is as meticulously designed as the music. Order yours. Streams below...