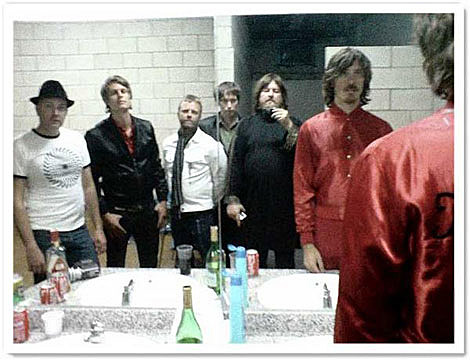 Nearly four years since their last studio effort, power pop-psychedelicists The Soundtrack of Our Lives land the rock n' roll mother ship once again with the release of their 2 disc, 24-track opus Communion in early '09.

Caftan-sporting eccentric lead singer Ebbot Lundberg, guitarists Ian Person and Mattias Bärjed, bassist Kalle Gustafsson, keyboardist Martin Hederos and drummer Fredrik Sandsten experienced divine inspiration in the studio, completing basic tracks in a mere two weeks. "This was the easiest, most natural thing we've ever recorded," Lundberg notes, adding, "It really felt like the album created itself, like we had a dream of what the album was supposed to be and then the album became that."

After it became evident the band was taking a new musical direction, the members decided to abandon plans for a follow up to their last album Origin Vol. 1 and instead focus on a large scale mood piece based on the concepts of day and night-a song for each hour.

The new album is being put out by Yep Roc and, not long after its release, the band will visit the US to play a bunch of shows including Music Hall of Williamsburg on March 11th, and Bowery Ballroom the next day. Tickets for the NYC shows are on sale Friday.

To quote Avi Roig, "TSOOL would have to be one of the finest, balls-out rock'n'roll acts I've ever had the pleasure of seeing. They haven't played the US in ages, so I wouldn't miss 'em." All dates below...