The Specials on Fallon... 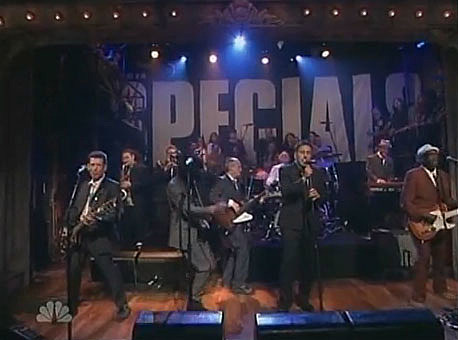 Central Park SummerStage has yet to announce their schedule of free summer shows, but when they do, it will include The Specials on August 22nd. Speaking of the Specials, the band appeared on Fallon last night as a kick-off to their very short April North American reunion tour. The next show is Thursday, April 15th in LA followed by Coachella on Friday. Then there's a Toronto show and two NYC gigs at Terminal 5 (April 20th & 21st). The first of those still has tickets.

The songs they played for Jimmy Fallon were "Message to You, Rudy" (on TV) and "Little Bitch" (which Fallon posted as a web-only clip). Videos of both of those, and all dates, below...

And speaking of UK groups that have reunited with less than all of their members and are currently in the United States to play Coachella and other dates and late night TV, check out videos of Public Image Ltd on Kimmel.