The Specials at SXSW 2013 (more by Greg Cristman) 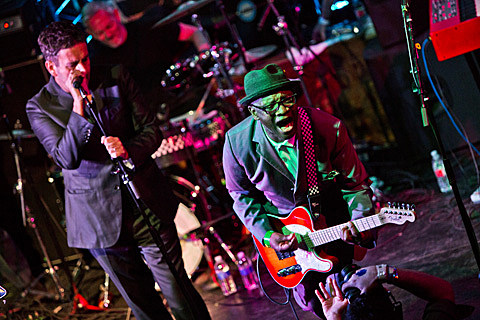 Second-wave ska titans The Specials, who just wrapped up a string of North American shows (including SXSW), are back in the UK now, but will head back to the US in July for a set of East Coast dates, including the previously discussed NYC date at Pier 26 in Hudson River Parkon July 17 (tickets).

The band have since added a few more dates on the East Coast, including The Paramount in Huntington, Long Island on July 18 and The Stone Pony in Asbury Park, NJ on July 20. Tickets for those two shows go on venue (Paramount) and LiveNation (Stone Pony) presale at 10AM Thursday (4/11) with the regular on-sale happening on Friday (4/12) at 10 AM.

The Specials also play July 16 at Ives Concert Park in Danbury, Connecticut. Located a mere 70 minutes by train from NYC, it might make a nice alternative for NYC folk who want to see them. It's part of the venue's 2013 season that includes moe., Gov't Mule, Tony Bennett, Everclear, and Brandi Carlile. Tickets go on AmEx presale at noon and the regular on-sale is Friday (4/12) at noon.

There are a few more Specials dates as well which are listed, along with the initial Ives Park 2013 summer line-up, below.