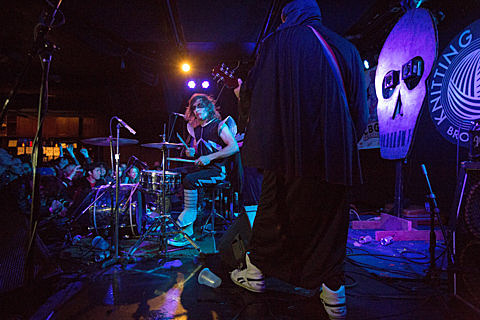 For more than fifteen years The Spits have been gracing the world with their particular DIY brand of dirty garage skate punk. Formed in Seattle in the mid 90s by Michigan born brothers Sean and Erin Wood, this Kalamazoo based band has released five self titled albums and toured extensively, amassing an impressively devoted fan base. Currently in the midst of a tour with Useless Eaters to promote the re-release of their rarities compilation Kill The Cool (In The Red Records), The Spits hit NYC for two shows last week. First was Brooklyn's Knitting Factory on Thursday (10/10) with local thrashers Foster Care, and then Mercury Lounge a day later. Pictures of the Knitting Factory show are in this post.

Brooklyn based snot nosed punk purists Foster Care didn't hit the stage until almost 10pm, throwing themselves into a frantic set, with singer Chris Teenager propelling himself into a quickly growing crowd and dousing the stage (and many of the punters) with cheap beer. Backed by guitarist Patrick Sullivan and two thirds of Ex Humans - Jesse Crawford and Josh Martin - Chris worked the room into a frenzy with songs off their 2012 debut Bad Vibe City.

Useless Eaters singer and Jay Reatard protégée Seth Sutton is a natural front man, and Thursday night's moody postpunk, garage tinged, foot stomping set did not disappoint. "Why don't you kill yourself!" Seth half sang half spat at the crowd, who grinned back in response. With a distinct influence of British greats such as Wire and Gang Of Four, their cover of "Rowche Rumble" by The Fall was a well-received highlight, as were the many songs off their 2013 release Hypertension.

Rumors of the show being sold out started to finally make sense as the venue quickly crushed to capacity in feverish anticipation of headliners The Spits. A giant skull flashed almost eerily behind them as the band took the stage clad in their frequently donned wizard robes, with keyboardist Josh decked out in glam Marc Bolan-esque space punk attire. From the opening notes of "Witch Hunt" the crowd pogoed and fist pumped, and by the third song, "Live In A Van," cans were flying, as were crowd surfers, and photographers were clamoring atop the bar to swill booze and get better shots (Hi Zuzia!). "All I Want," "Let Us Play Your Party" and much loved 2001 single "19 Million AC" had the entire room shouting along to every lyric.

Finishing the night with a three song encore, The Spits retired, sweat soaked and eyeliner smeared, to their dressing room and the leather clad masses tumbled out into the Williamsburg streets.

More pictures, including one of The Spits' setlist (snapped by Bree Roberts) but none of Foster Care, below... 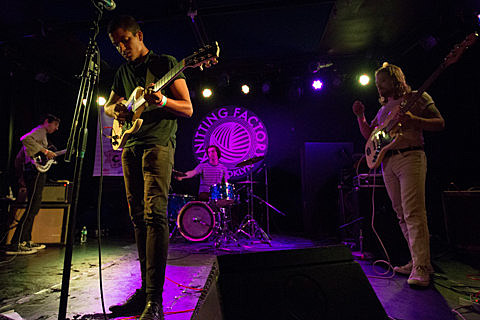 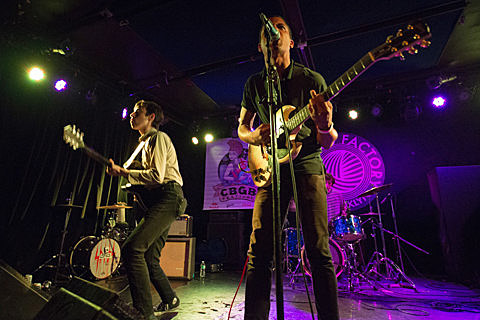 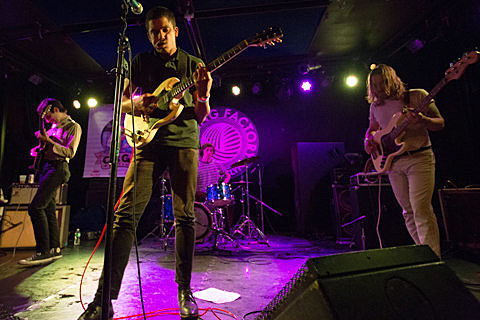 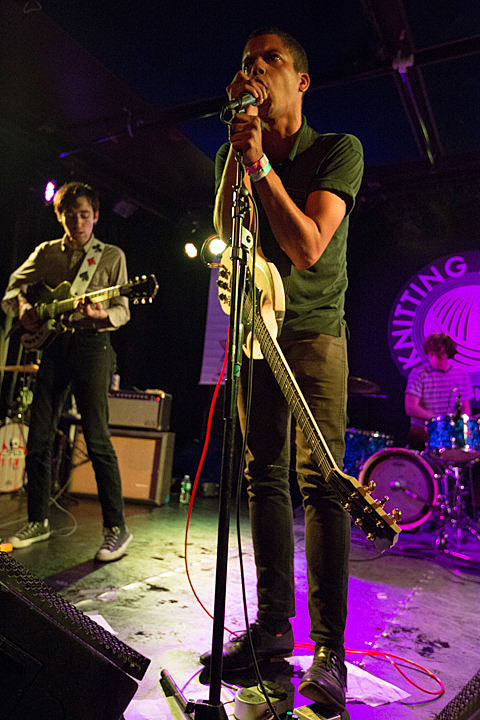 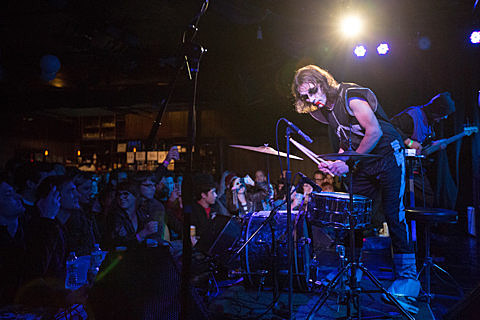 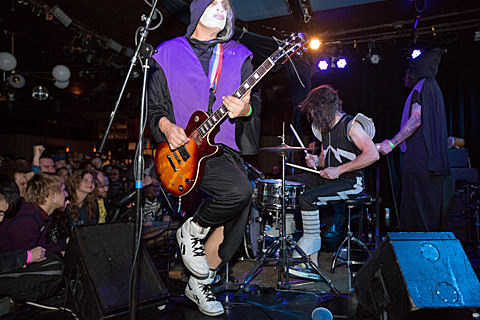 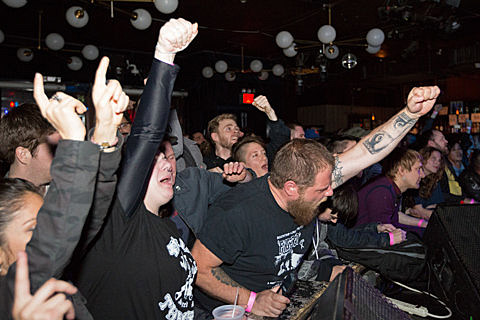 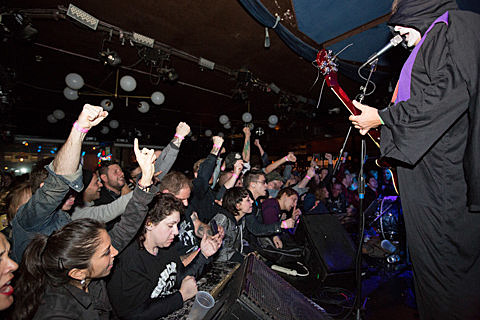 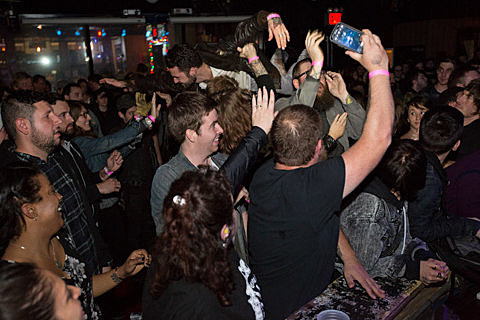 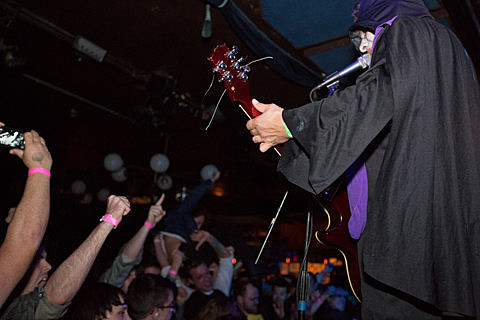 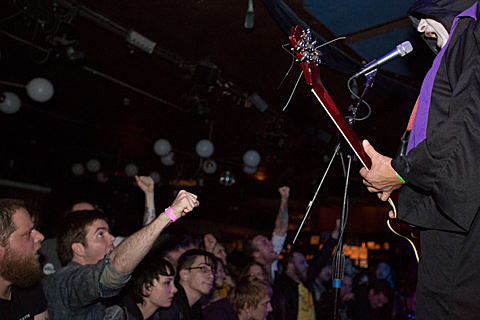 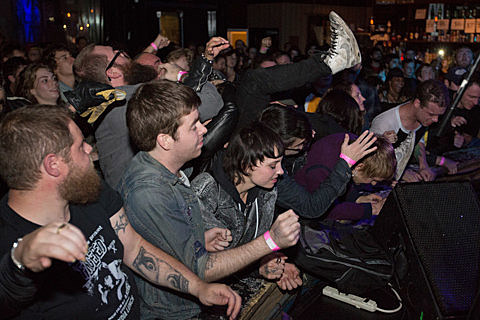 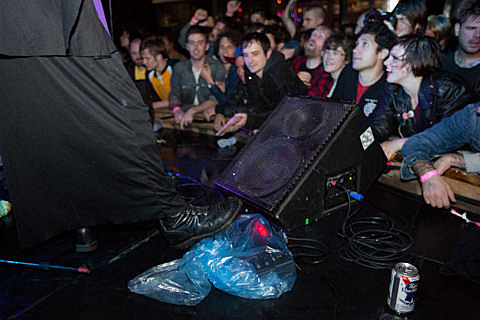 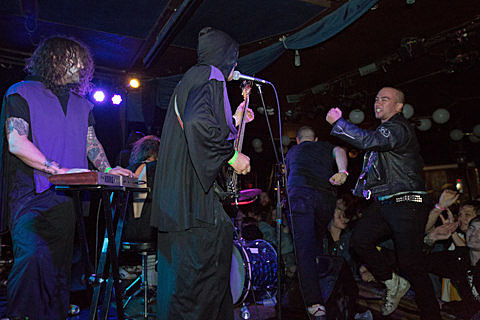 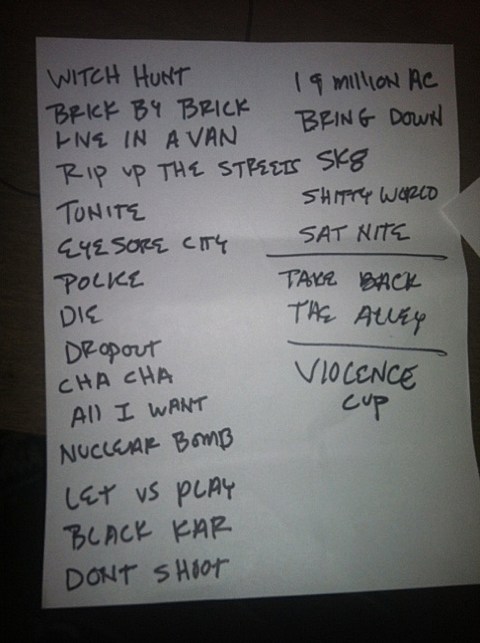