The Spits at Chaos in Tejas (more by Keith Marlowe) 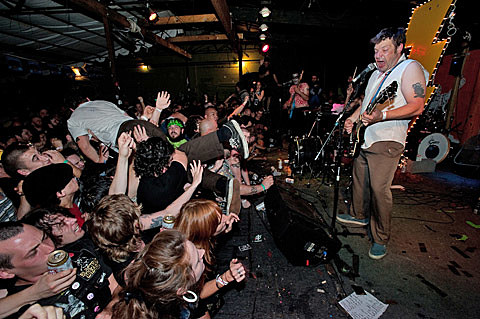 The Spits know their way around a poppy-Ramones-y hook, so look for the band on the road as part of a string of dates with TV Ghost dubbed the "Blazing Blowout" tour. The dates, which kick off in late February, include a stop on March 1st at Cake Shop and March 2nd at Knitting Factory. Tickets to the Brooklyn show are on sale. All shows are listed below.

TV Ghost is preparing to release the new "Phantasm" b/w "Panic Area" 7" via Sweet Rot Records. The band released their latest LP Mass Dream last year; check out a video from the LP below.

The Spits released last year's BV favorite V via In The Red Records. Check out some live video from the band's New Year's Eve appearance at Cobra Lounge in Chicago below, alongside the tour dates.

THE SPITS "LIVE IN A VAN"