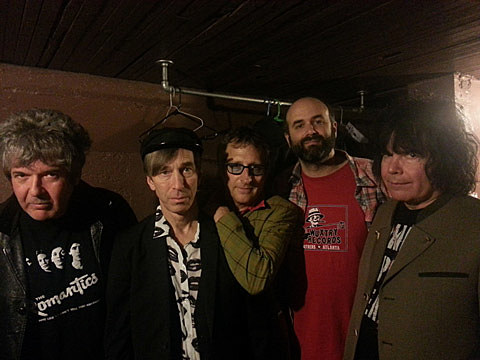 The Split Squad formed around singer/bassist Michael Giblin, who is a session musician and producer and has fronted bands like The Paralax Project and Cherry Twister. If that name is unfamiliar, you might know some of the rest of the band: Clem Burke (Blondie), Keith Streng (The Fleshtones), Eddie Munoz (The Plimsouls), and Josh Kantor (The Baseball Project). The band's 2013 album, Now Hear This, was produced by Young Fresh Fellows frontman Scott McCaughey and features appearances from R.E.M.'s Peter Buck and members of upstate NY powerpop trio The Figgs. Given that group of musicians, it might not surprise you that The Split Squad make crunchy, Beatlesque rock pop. The record's a fun listen and you can stream the whole thing below.

The group are on a weekend East Coast tour and play NYC tonight (4/25) at The Bowery Electric. The Figgs are on the bill, plus Los Dudes, and tickets are on sale.

The Split Squad also play New Haven, CT's Cafe Nine on Saturday (4/26) and Long Branch, NJ's Brighton Bar on Monday (4/28). Dates are listed, along with the album stream, below...