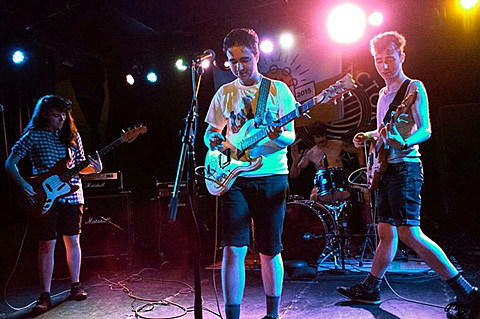 Scottish band The Spook School just played Saturday at Knitting Factory as part of NYC Popfest. I missed their set, as I left Knit to Cake Shop to see SAVAK and The Gotobeds but did anyone else catch it? They were terrific at 2014 Popfest. The band are still in the US and are touring with Wildhoney (who also played Popfest), and both of them will be back in NYC next week for the Kanine Northside showcase at Alphaville on June 11 with Beverly, Expert Alterations and more.

Meanwhile, The Spook School just released a music video for "Burn Masculinity," their contribution to the From the Plan-It-X compilation It Came From Plan-It-X. It will also be on their new album which is due out in September via Fortuna Pop and you can watch the video below.

Wildhoney have two other Northside shows: The Exploding in Sound showcase at Aviv on June 12 with Kindling, Clean Girls, Mannequin Pussy, Vulture Shit and more (tickets); and the Iron Pier showcase at Acheron on June 13 with Self Defense Family, and Somerset Thrower (tickets).

All The Spook School / Wildhoney tour dates are listed below.